A parallel world full of hallucinations, magic and fairy tales. We found it, just 80 km from Moscow. Good characters always win in fairy tales, and who will win in this history?

The camp is located in Dmitrovsky district, near the village of Gorki, in the urban settlement of Dedenevo. Follow the map at the end of the article, the exact location is indicated there.

You can either get here by car along Dmitrovskoye Shosse, turn left on the 56th kilometer from the MKAD, drive past the villages of Shulkovo, Celeevo, Paramonovo, Gorki.

Or by train: from Savelovsky station to the Tourist platform, then by minibus to the village of Paramonovo, and then by foot. 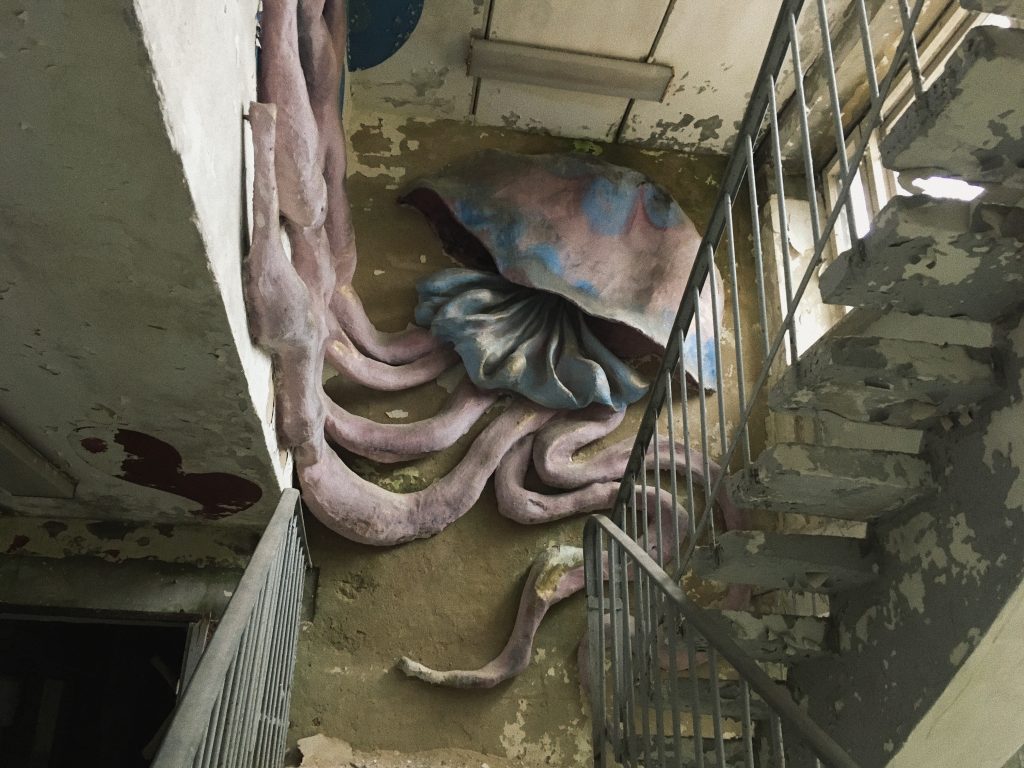 The security at this place is pretty … interesting. I initially knew that you have to pay to guardian to go inside and was mentally prepared for this (before that, I had never paid for entering to any abandoned houses, but this place was really a thing and I was ready to give up on my principles).

It was written on the Internet that you can climb quietly inside, but then, when you climb out, your wheels of the car may be lowered or dogs will be set on you. Since I was with a puppy and with my favorite car-Niva, I was dumb from such prospects. Therefore, I decided to pay, but, having arrived at the place, I did not find anyone.

I thought that they forgot about this place as it’s almost the winter so you can just climb. A security guard caught us at the exit, yelled at us and said to urgently delete all the photos. But we decided that paying at the end of the exploration is unreasonable and played “in the fool.” Fortunately, everything worked out well.

Therefore, we advise you to pay, go to the main entrance, which is located a bit further than the former main entrance to the camp, find a guard and give him money (300 RUB). Next, we will explain why, in addition to security, it is worth doing so. 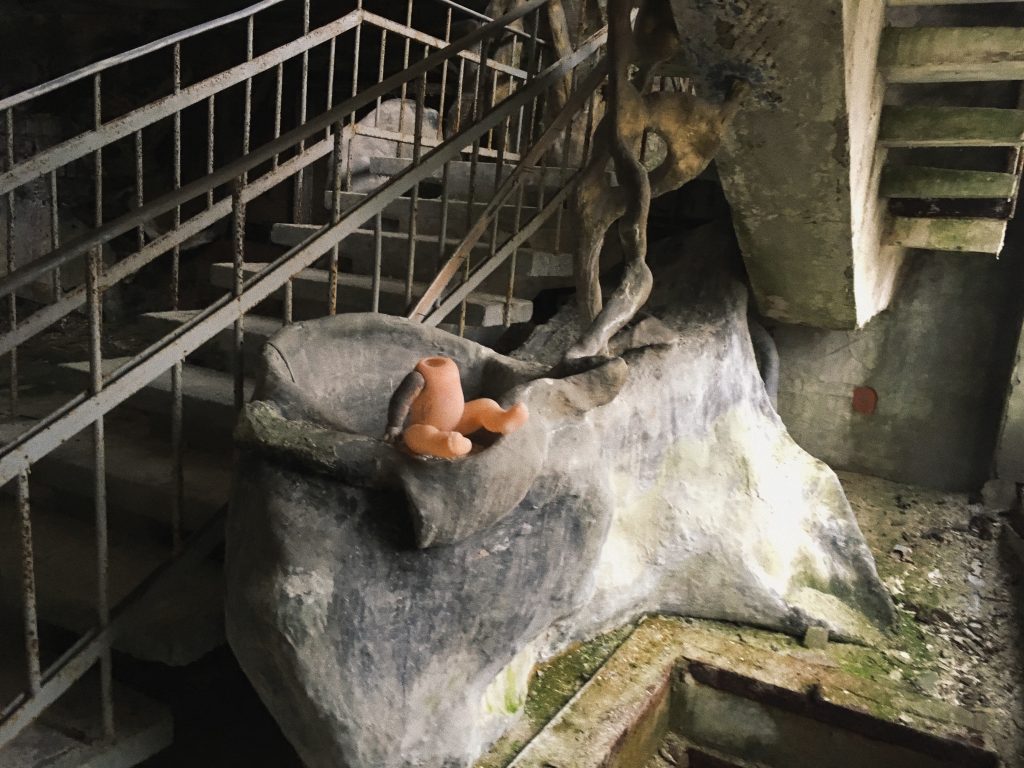 Camp “Fairy Tale” was built in Soviet times under Brezhnev for the children of the staff of the publishing house “Children’s Literature”. At the same time, there is a myth on the Internet that deaf-mute children were resting in the camp, which is not true.

The story of “Fary Tales” ended in 1997, when the book factory that owned the camp went bankrupt. In principle, this is a pretty standard story for many Russian children’s camps, for example, camp in Vladivostok that we described before. 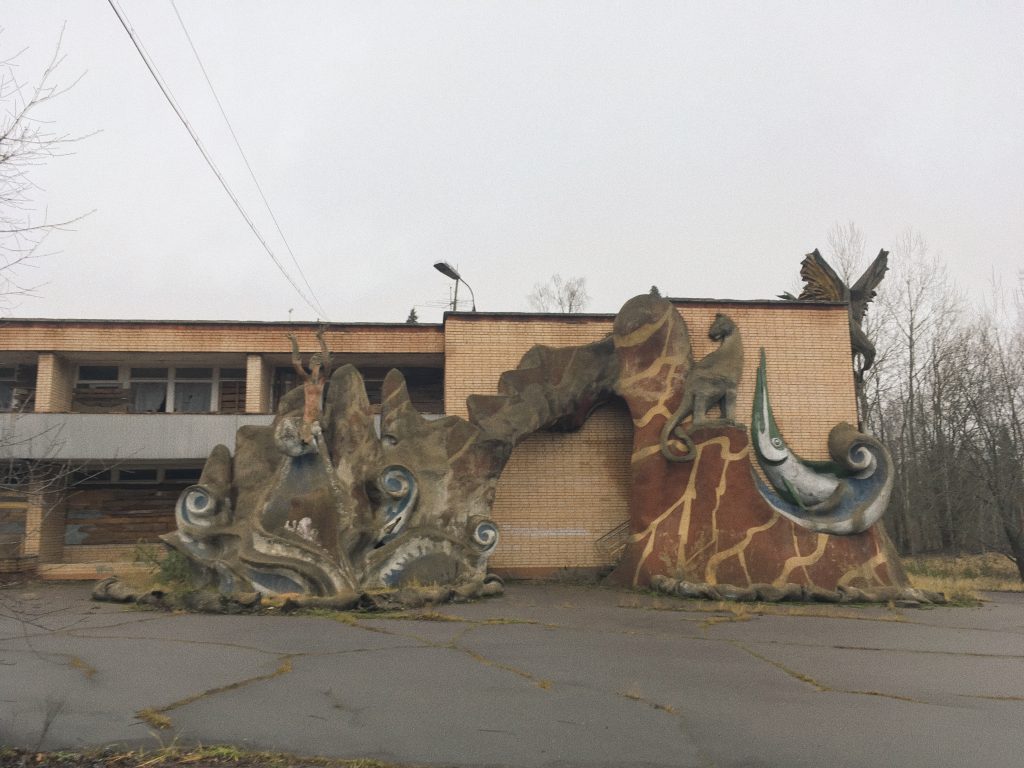 I knew about this place already for 3 years and since then I really wanted to come, but the guards at that time were really atrocious and did not let anyone in. It was then that they decided to have mercy and let people in for money and I decided to definitely go, because the pictures from there were really magical. 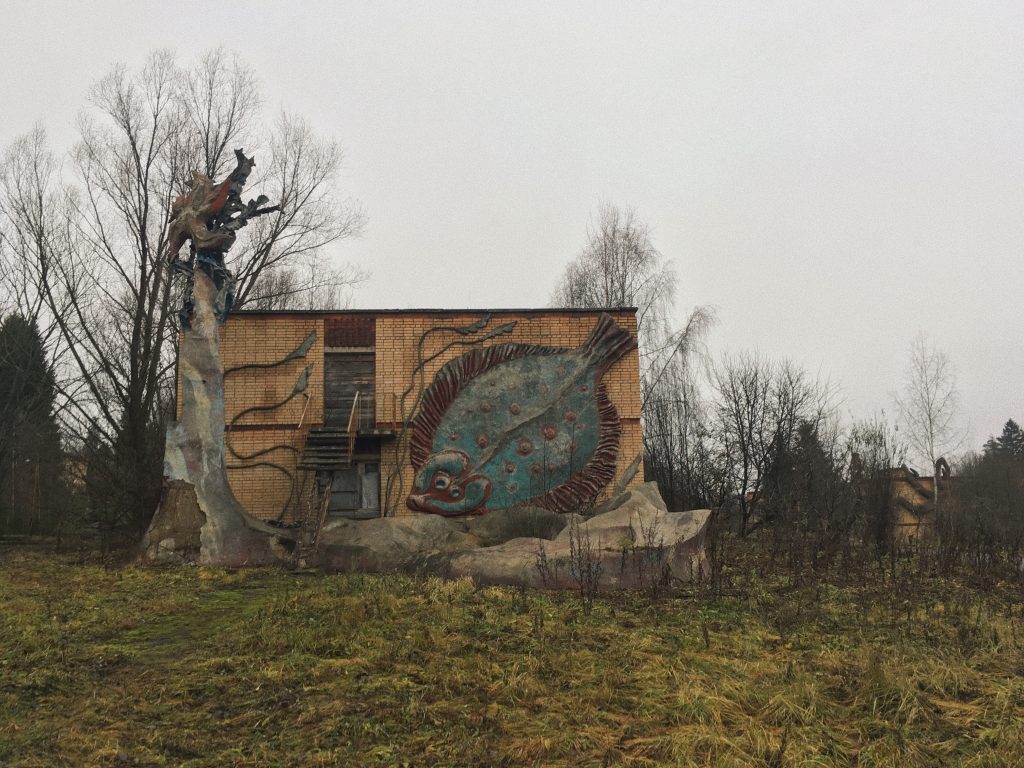 We decided to go to this trip with a Brazilian guy who stayed with me on couchsurfing and who leads a YouTube channel (a movie about our trip will be released there soon!), and with my doggie.

As already mentioned above, without meeting the guard, we decided to climb through the hole in the fence. By the way, they are all almost skillfully covered with barbed wire, but I was still able to find one where we all climbed through. 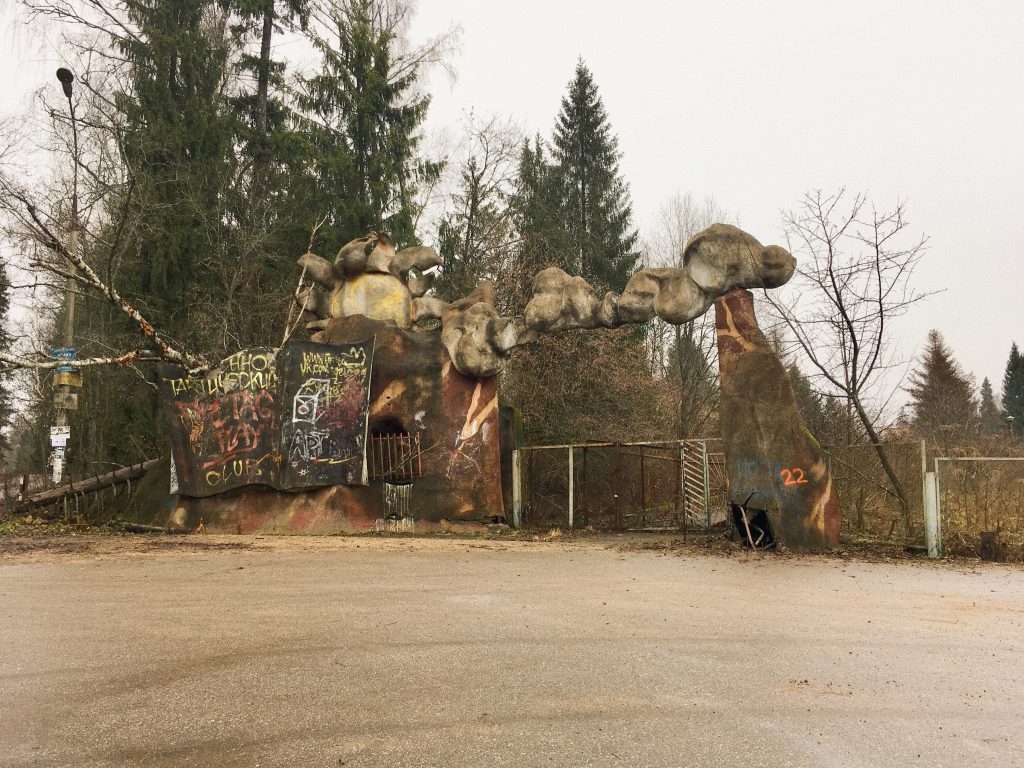 The camp itself was above all my expectations. It seems that we were delirious of someone’s hallucinations. All this is so strange, so unrealistic that you only wonder how it felt for the children to live here?.. But according to the recollections, they were quite ok with such stuff.

The entire camp is made in the marine theme, everywhere thehe are the figures of fish, mermaids, algae …

I was also impressed by Lenin, who did not at all look like him. But according to many other reports – this was still him. 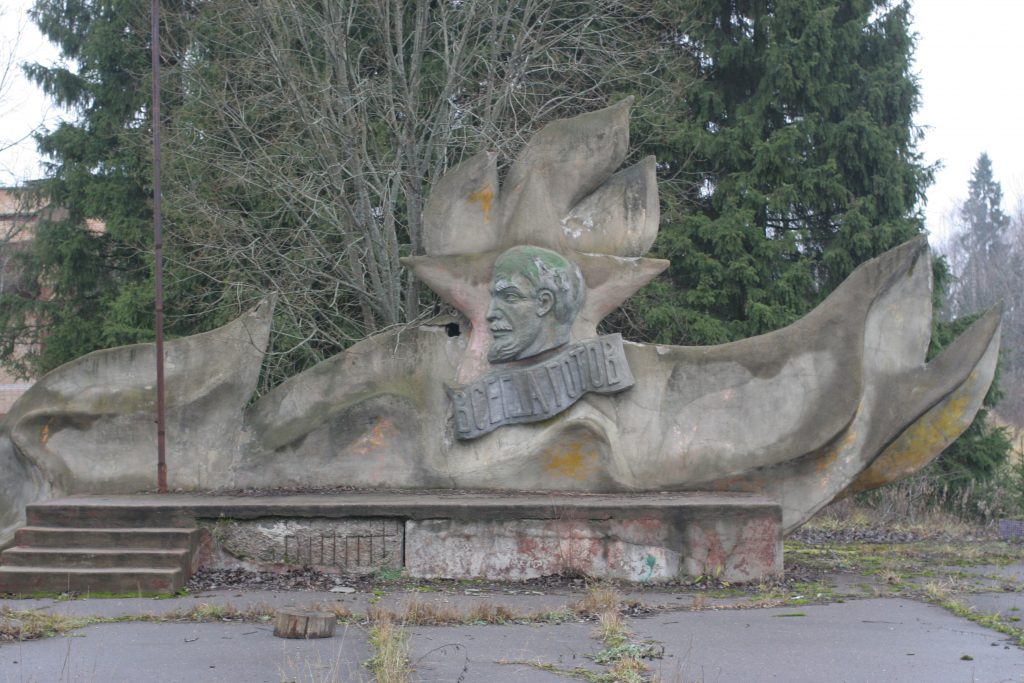 At about the end of our “excursion”, we came across a family that quietly walked around the territory and took photos. It became clear that they had definitely paid for the entrance and somewhere at the exit there is an insatiable greedy guard waiting for us…

In principle, it turned out that way. Later, I found out that with him it would be possible to get to some buildings, where we could not get in the usual way, because they were closed. For those who pay, the guard specially opens the dining room with a huge library and a cinema hall. This is really interesting, on the one hand, on the other – I am glad that I did not give up my principles and was able to visit this place for free. 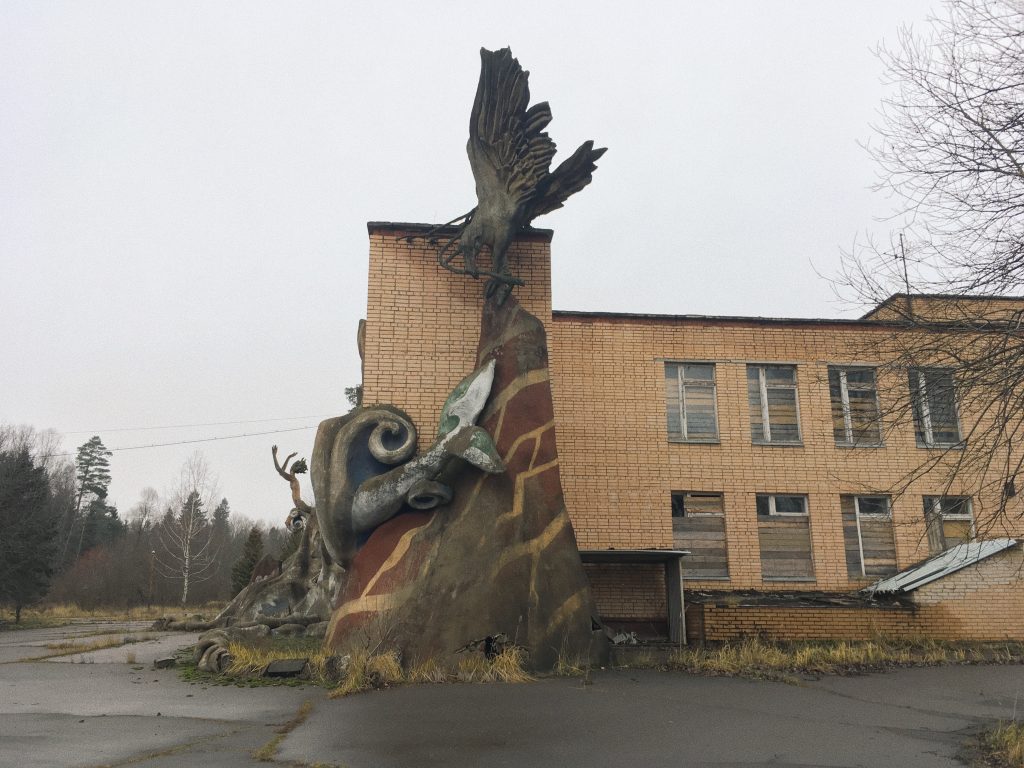 Because abandoned places are our common history and they belong to all of us, and not to greedy men who unlegally collect money.