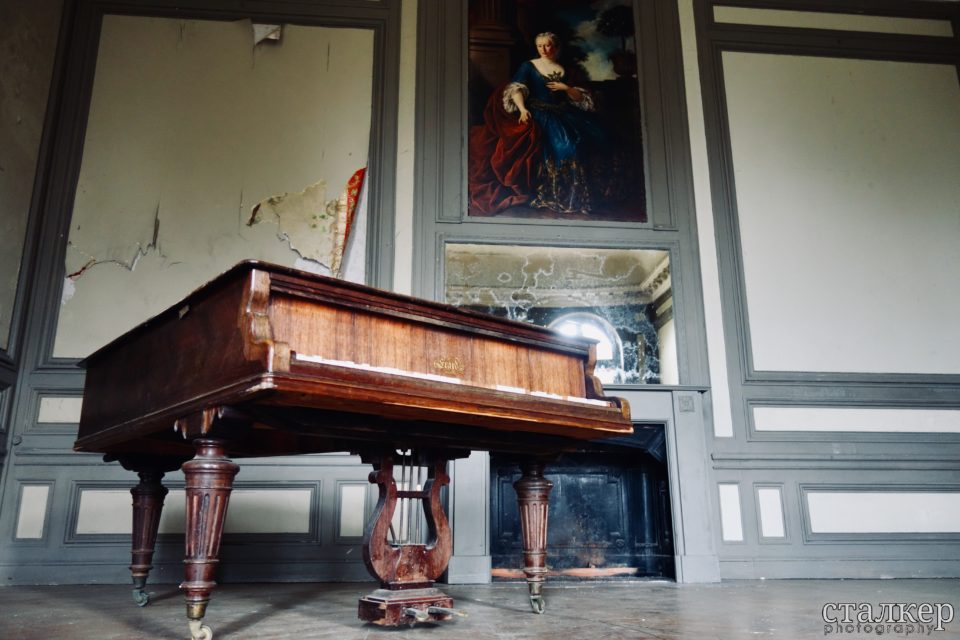 All of a sudden the silence becomes deeper, and from one of the smooth ash-white walls comes out a red cast of a face.

The abandoned castle is located not far from the border with the Île-de-France region. Entering the property and the interior of the villa is quite easy. Beware of a probable guardian who, in his absence, has left as a warning to intruders a leaflet with several warnings written on it. 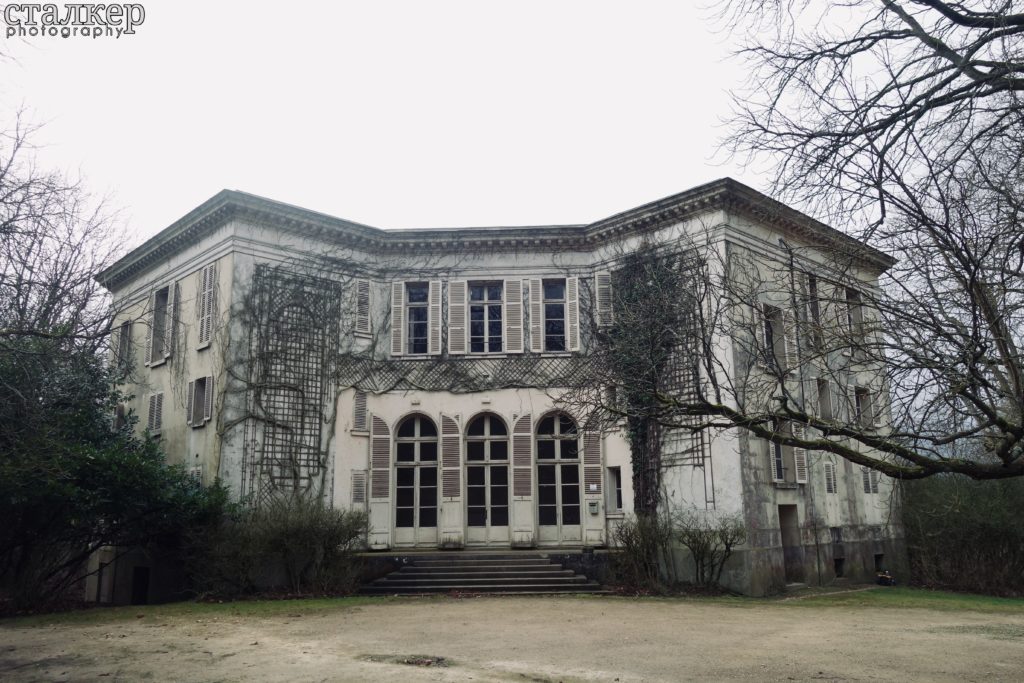 The “Château de la Côte” is one of the outbuildings of the “Château Menier” or “Tournebride”. The château was designed in 1913 by the architect Charles Léon Stephen Sauvestre on behalf of George Menier, a famous chocolate industrialist.
During the Second World War the castle was occupied by Nazi Germany. In February 1944, inaugurated personally by Heinrich Himmler, it became the only Lebensborn castle in France. This Lebensborn was a maternity hospital housing French, Dutch, Belgian or Norwegian women who were pregnant with SS officers. The Lebensborn Project (Source of Life Project) was one of several programmes initiated by the Nazi hierarch Heinrich Himmler to implement the eugenic theories of the Third Reich on the Aryan race and bring the Aryan population in Germany to 120 million people by 1980.
A few months after birth their child was sent to Germany for adoption.
In the “Château de la Côte” resided the Schutzpolizei, responsible for the surveillance and security of the site. Mothers and newborn babies lived in the ‘Château Menier’.
After the Second World War, in 1955, the castle was used as a rehabilitation centre for children. In 1967 it became the property of the Red Cross.

Secondary sources say that for 10 years there have been internal struggles over the ownership of the property. For the moment it is used as a film set. A piano has been placed inside to shoot some scenes from the movie “Taken 3”. The television series “un village français” was partially shot in the castle.
Among the urbexer the place is known as the “Manoir aux cerfs” due to the fact that some deer were introduced in the park. 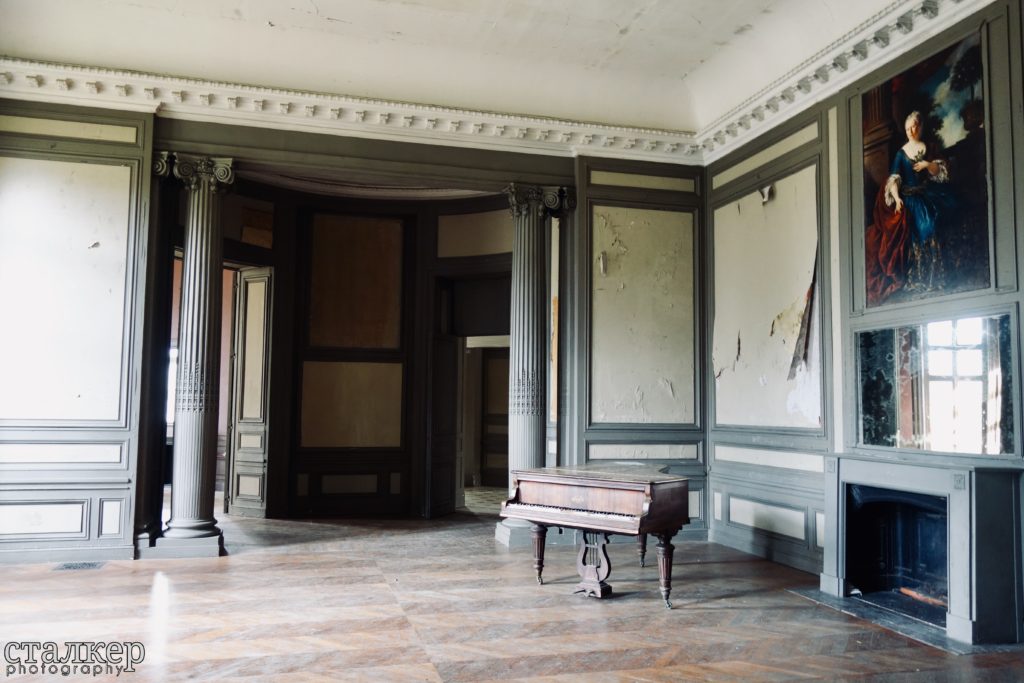 A trouble-free entry looks like a rather simple exploration.

At first, I head into a one-story cottage, introducing myself on the wrong side. Needlessly I passed through a window half broken when the front door was open. A sewing machine and a closet with several insurance papers are waiting for me on the first floor. This house probably belonged to the caretaker of the villa.

“A house made exactly on a man’s scale”, comment between me and myself.

I continue along the tree-lined avenue, flooded with leaves that, moved by the wind, continue to fall and form a thin cushion layer by layer. The sky is menacing, and as if it was a warning not to enter the property it shows itself in all its vigor and vehemence.

On either side of the garden are the stables and the pigsty, now used as a storage room. A little further on is the greenhouse with all the terracotta pots scattered around the courtyard and the stables.

As I approach the villa, I feel a presence wandering around. My anxiety is confirmed by a leaflet attached to the front door, which warns unwelcome visitors to leave the area. “I am nearby” or “I live here, inside the villa”, immediately puts me in awe. Thinking about it rationally, I bring everything back to the present, and I am convinced that that paper only serves to frighten intruders, nothing else. 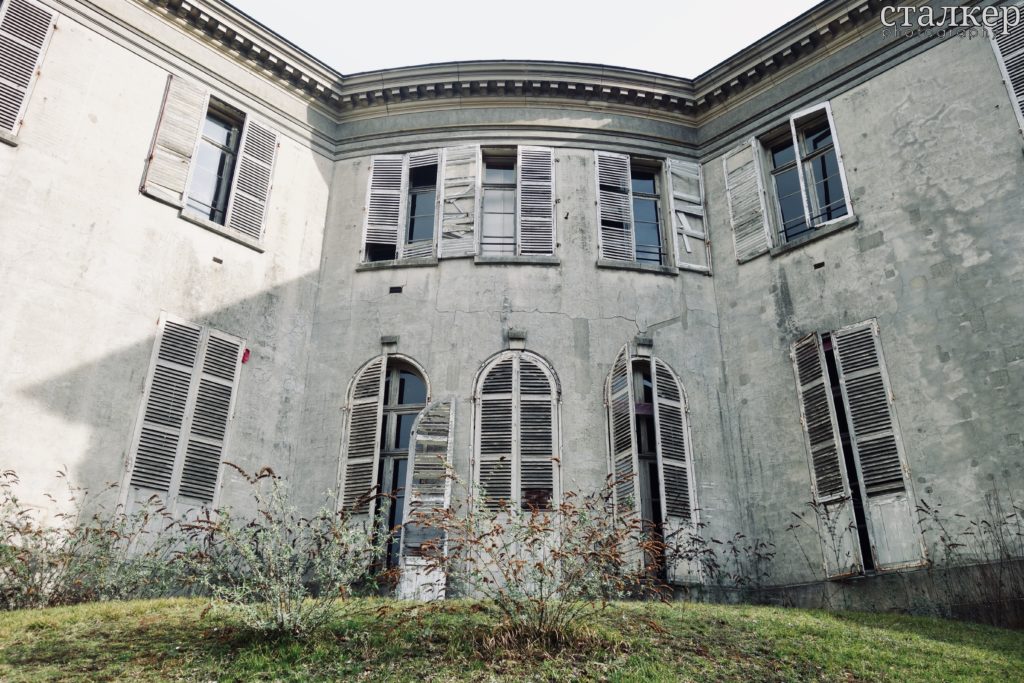 I go around the villa to find an entrance, and there I find the door open in the back.
I open, and I find myself in front of spectacular scenery: a piano with a painting of a noble lady posing behind it. Under the fireplace, the wooden floor and columns on either side of the room. All enormously spacious, and passing from room to room I agree how unfortunate it is that all this is abandoned. Huge doors, very large windows, and fireplaces everywhere to heat these immense spaces.

The first floor is divided into several rooms, and you can enjoy the view of the “chess room”. Most have already been taken and emptied of everything, and only a few closets are left. 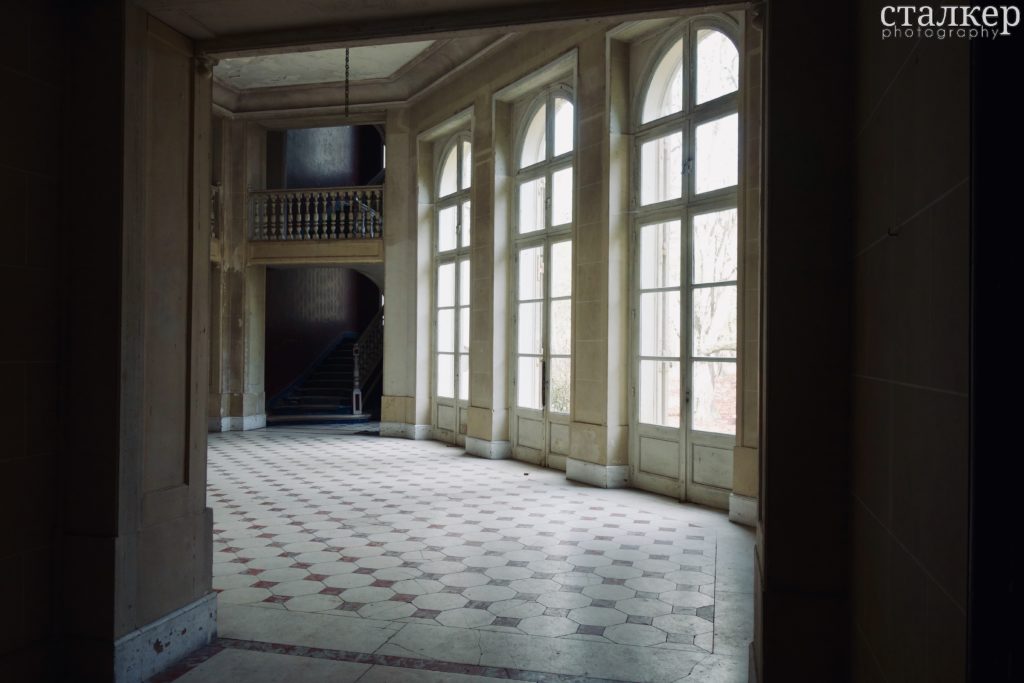 On the second floor, the castle gives me a fright. In one corner of the room a mannequin all proud and strutting about.

Can I trust it? Ah, a faithful friend until it finds out it can go alone and the first steps will move.

As the wind blows and it wants to be heard. It purposely untied some plastic sheets from some windows to make them slam violently between them. 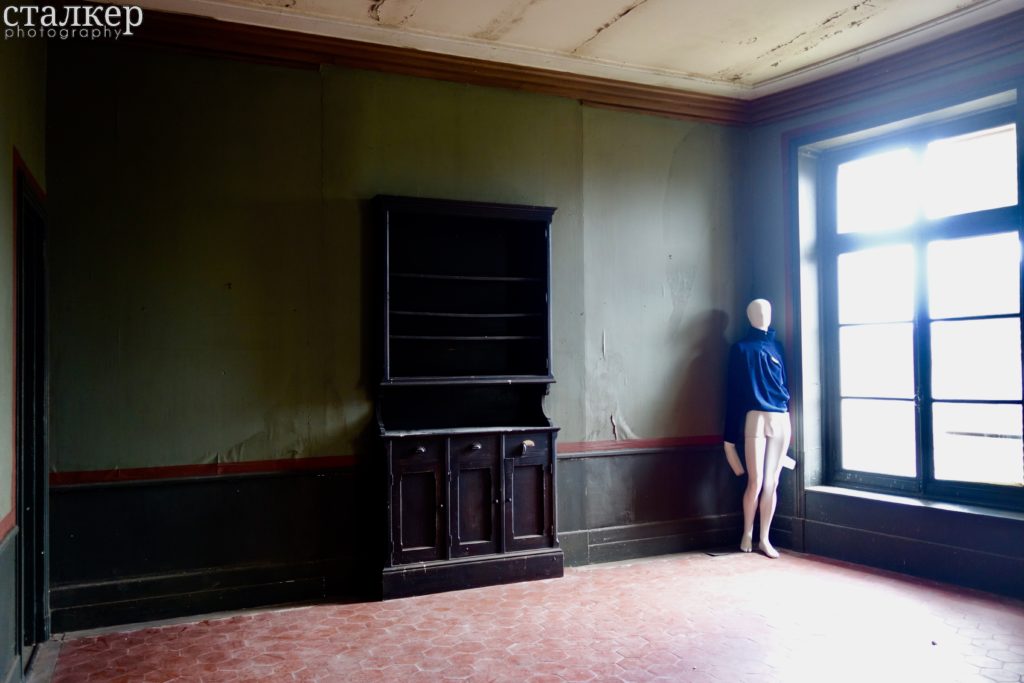 Where will the wind be when it’s not blowing?

On the top floor, in the roof, after having moved a latch that holds a small wooden door steady, I am once again caught by the wind and catapulted on the ground. All around it is green, and the wind gives the sky back its light. Dreary, gloomy and fascinating. Right now, at the moment when the wind pushes harder, I feel calm and peaceful. As if I were lulled by all this air, I let myself go.

Returning to the entrance, down the steps, I remember the basement. And here I am inland, where the walls ooze with sweat, and the narrow doors wait in the dark. I come across what must have been the kitchen, and the department where the meat was kept before being slaughtered.
Other dark rooms contribute to a dark and gloomy atmosphere.

In spite of everything, the dungeons are the only place in the castle where I don’t have the feeling of being spied on. That said, I return to the ground floor to take the last pictures. 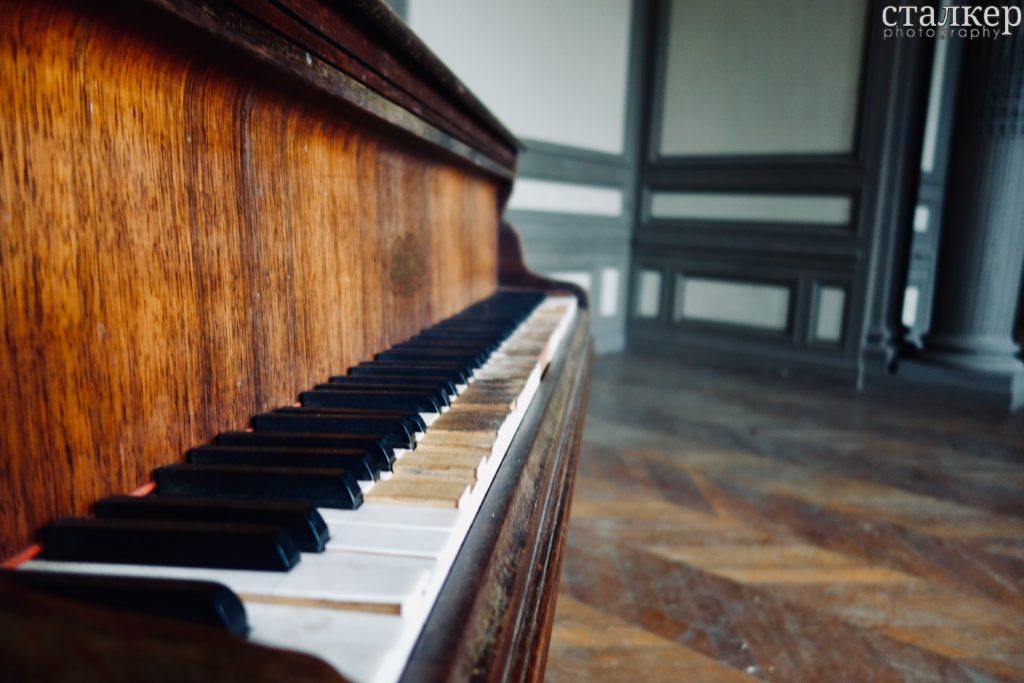 Everywhere, my own reflection follows me. The mirrors repeat themselves continuously, without stopping, and create a duplicate of myself that follows me everywhere. As the writer and playwright Bernard Shaw used to say, you use a glass mirror to look at your face and you use paintings to look at your soul. I would add that the mirror has an even deeper meaning, that it responds to certain needs of ours, and at the same time multiplies and nourishes them. 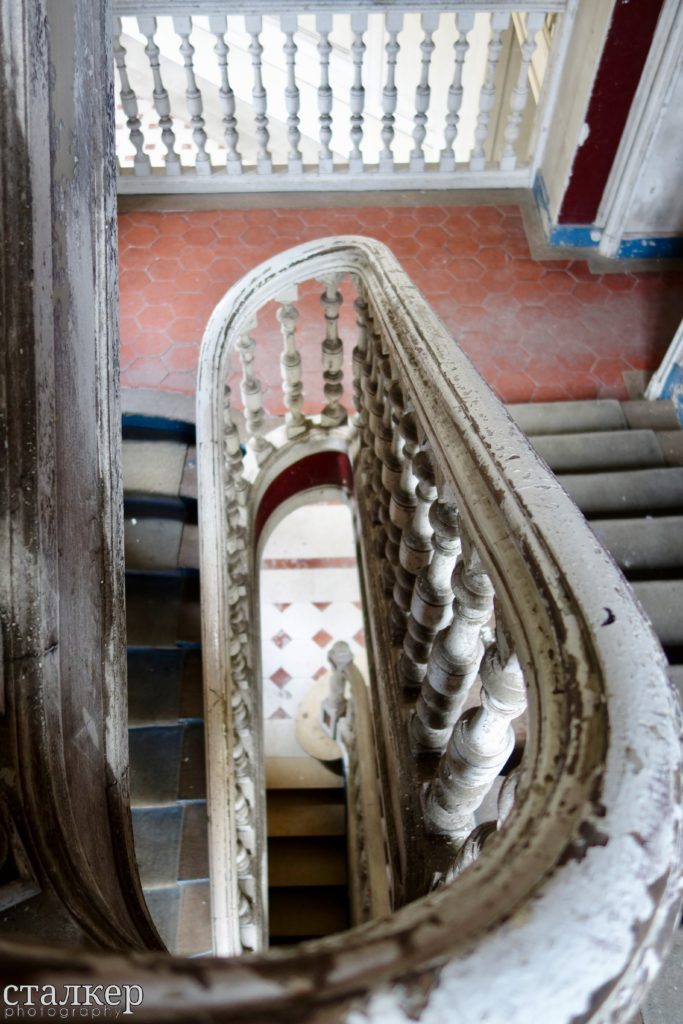 At a certain point, I feel trapped, and here I see something emerge from the wall. A reddish substance comes out, which slowly takes the shape of a face… mine.

Who’s watching who? Is that a grin? A slightly hinted smile?

Mutual awareness. I close my eyes, and when I open them again I’m the one trapped inside the wall. A boy dressed in blue and his face painted red looks at me and jumps away. I try to scream but I can’t, I have no voice. The last thing I hear is the chimes of his reel-to-reel heels. 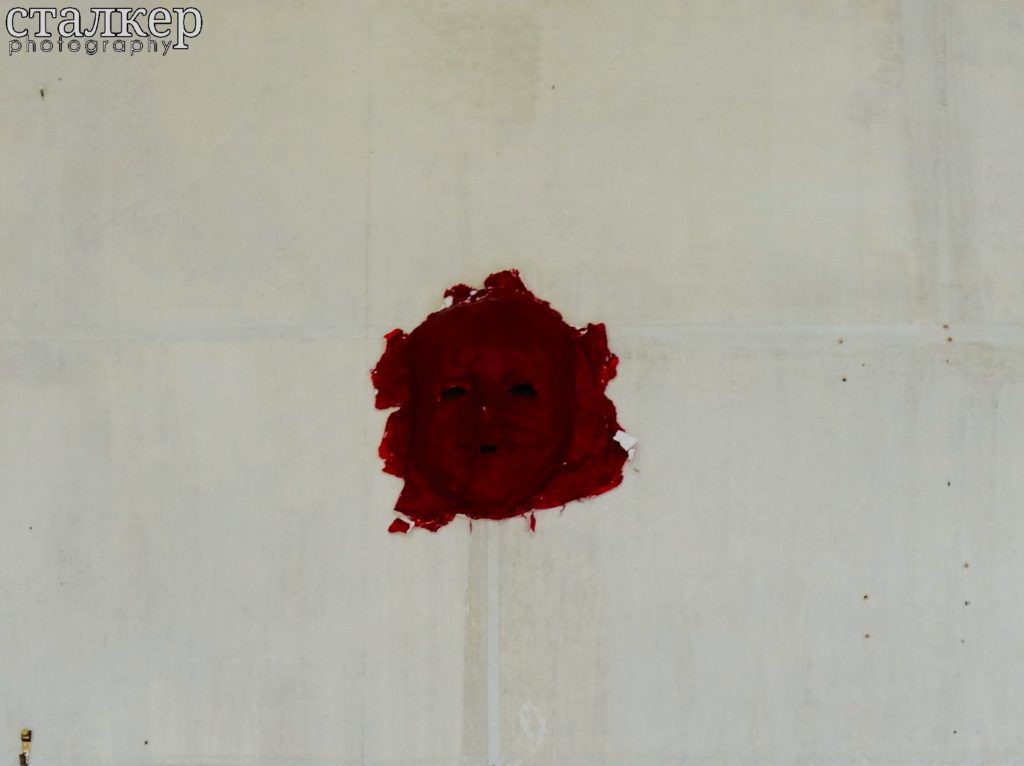