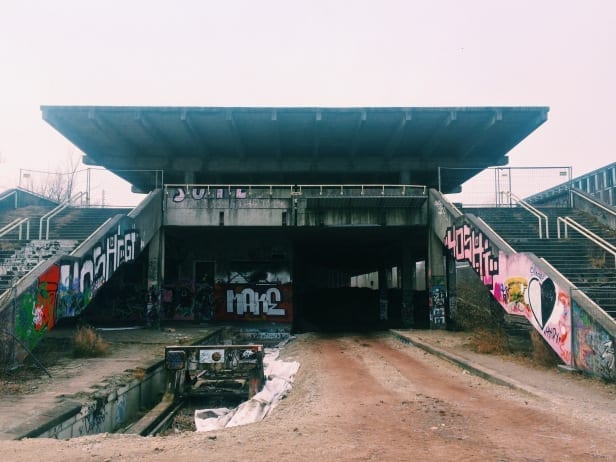 Have you ever thought about what is left when Olympic games are over? In most of the cases it is stadions, olympic villages, tracks, which nobody uses more… There were 23 countries who have taken part in Olympic games since the first Olympiad in Athens in 1896 year. But today we will talk about Germany, which hosted Olympiade for three times: in Berlin (1936), in Garmisch-Partenkirchen (1936) and in Munich (1972).

About remains of Berlin Olympiad we will talk in our next article, and today it is time for Munich.

So, Munich, the richest city in Germany. It was really strange to find out that here could be something abandoned, because each square kilometer here costs lots and lots of money. Though we have found here an abandoned metro station Munich Olympiastadion, which was used for Olympic games, and after was shut down.

The station was built-in 1970 and opened on 26 May 1972 to provide more transportation for audience to see the 1972 Summer Olympics.

Firstly there were 4 tracks in total, and 2 platforms. Later just one platform operated, meeting people during football matches in the nearby Olympic Stadium.
The station was officially closed in 1988 after the last game of the 1988 UEFA European Football Championship took place, and after that has fallen into abandonment.

Abandoned metro you can reach by a normal metro. It is located on the station Olympia-Einkaufszentrum. Go straight on, and then you will see rails, here you can know that you have arrived.

Metro station, as well as rails to it, are surrounded by a fence, which is easily to jump over. Though be careful, in fact it’s forbidden to be there, and at the time I visited this place, there were some workers, who politely asked to go away.

First what you see is a huge monster of stone, that is greeting you. You close your eyes, and see instead him people running to the Olympic stadion from the metro-wagons. Now the time is topped here. Apparently there are even no rails, half of them are buried under the sand. 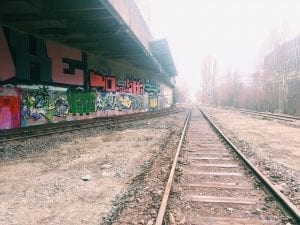 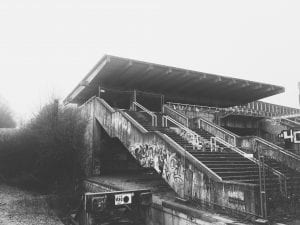 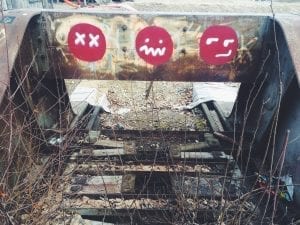 The place is left for graffiti artists, everything around is coloured with pictures. Around – broken glasses, so you can guess that the place is  chosen by young people to spend some evenings here.

One worker told me that government plans to build park here instead of the station, though nobody knows when and how.