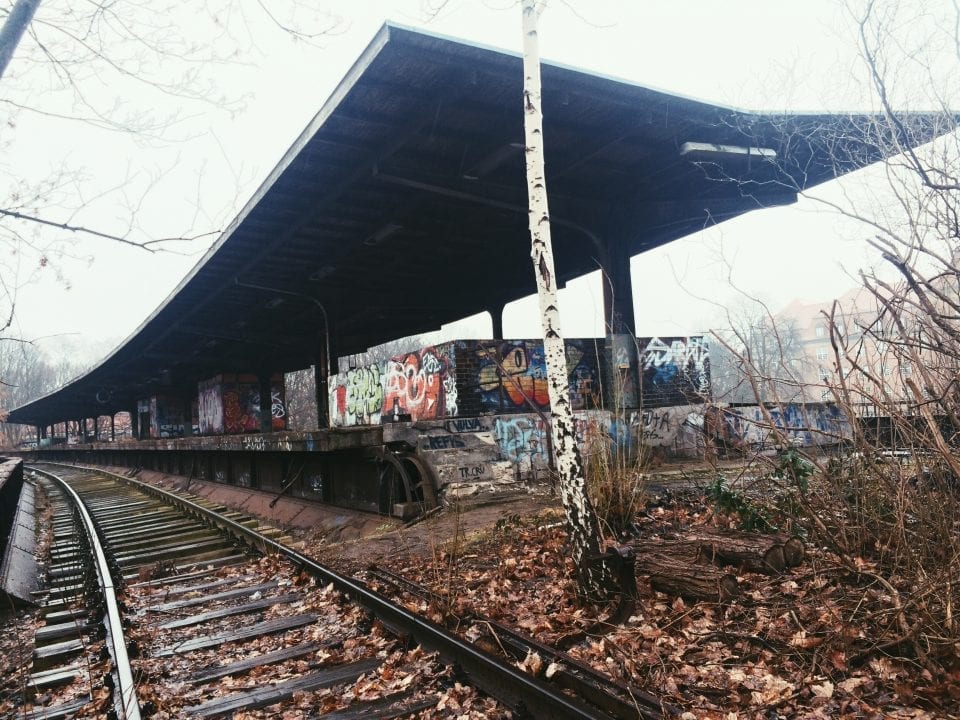 Berlin is known to be the city with the most checked by controller’s metro. But at this line you could relax: no tickets, no controllers, even no trains. Today we will visit the ghost metro line – Siemensbahn.

Go by metro till the station Siemensdamm, then turn the corner – and here it is, abandoned metro line. All the line is surrounded by the fence, I’ve found an entrance just in one place – go straight on in the direction of line and you will see the hole.

The route was built by the company “Siemens & Halske” between 1927-1929, not far from the factory, in order to let the workers of the company get to work faster.

The Siemens and the Deutsche Reichsbahn-Gesellschaft (DRG) agreed to start the constructing of the new line. Siemens took all obligations for constructing the line, as well as the purchase of the equipment for the railway station. So the DRG should just ensure the operation.

By the way, we should mention that Carl Friedrich von Siemens (responsible for the Siemens family business) was chairman of the administrative board in DRG. So just thanks to this it all worked out. (What a strategy!)

During the Second World War the route was damaged. Siemens also moved all his facilities in order to not be bombed (though in the end some were hit by blows). The building of Siemens factory itself wasn’t damaged much.

Russians replaced the blown bridge with the wooden one, as well as they tried to rebuild some railways. So in 1945 just a limited service was restarted. All the route together with the bridge was renovated by Siemens in 1956. Soon in 1961 the Berlin Wall was established, which led to the effects that the Siemensbahn line was one of the least used in the whole Berlin. There were just few trains per hour in 1970.

In 1980 the “Berlin S-Bahn strike” happened, where West-Berliners said that they were against the Berliner wall. They were boycotting the metro system, as for them it was seen as subsidising the communist regime in the East. People started using more the bus service. After that most of the metro stations in the western part of Berlin were closed down. Siemensbahn was one of them.

There were another stations that were operating in the near (also now), that’s why the closure of the stations didn’t bring much damage for the local people.

In 2014, Stuttgart architecture students proposed using the line to finally connect the future-former Tegel Airport with the metro system, though no real steps have been taken.

I was expecting to find a one abandoned metro station, but instead I have found three! Together with the beautiful, half-ruined bridge!

Following the rails I was filling myself like in jungles. Trees were growing even on the sleepers and in some places it was hard to move on!

Though I walked, I followed the rails, and then the first one station appeared. It was unusual as it looked like completely fine, down was the parking of the busses, people were running under the bridge. And me staying up on the station, waiting for the train that will never come. Inside one of the buildings there was even the room, where I could wait for the train!

Then I continued my way. Soon near the rails I have found broken bicycle, than an old trolley, a chair… Seems like homeless people were living here, sometimes bringing old things from the nearest trash….  Than on my own a two-floor building appeared. Half-burned, half-broken, it didn’t have anything special inside…

And then was the last station on this way. It was the only one interesting due to some half-broken statues that were laying on the platform…

And then the way back to the final metro station that I have missed and the bridge. The station was fenced with an iron fence, but nothing is impossible: I just sneaked down it! I could see that here was a little bit more dangerous, lots of the holes in the floor where you can easily fall, that’s why that fence is quite important.

The bridge was beautiful… you completely can’t cross it, as it is all in the holes, from which you can fall down the river. The boards were overgrown with moss, and you can see that it is a long time when the human foot stepped here last time….

We have written a lot about Berlin, and again we can see that the Cold War was the reason of abandonment of a place. As Spreepark, as Grünau Ballhaus, and as the swimming pool Pankow. This line, where was put so much of human power and knowledge, is not needed by anyone more.