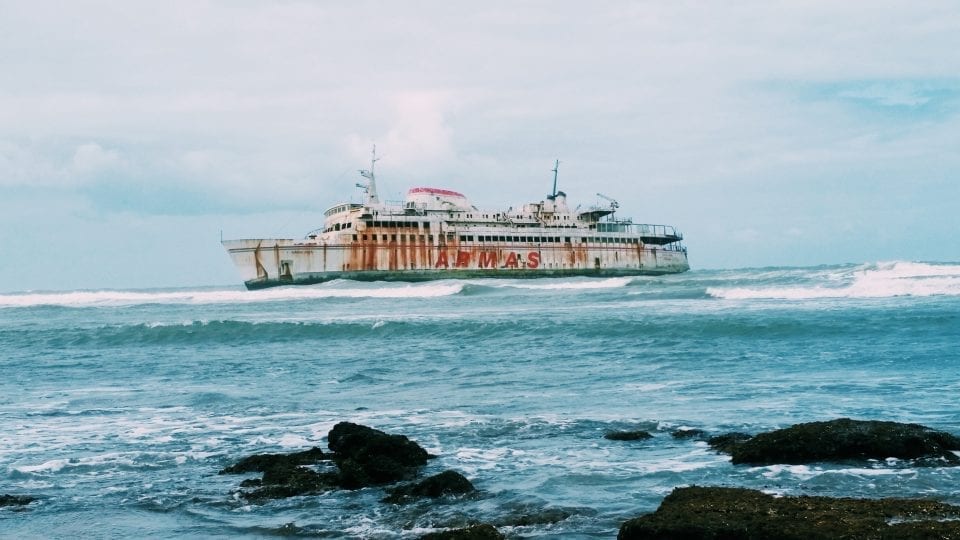 It was a sunny spring day when two travelers decided to reach Tarfaya in Morocco and its abandoned ship Armas to see, how it is today. They were afraid that the ship would be already dragged to scrap, but everything was on its places…like the ship sank yesterday…

In 2008, nine years ago, it was also a sunny morning, the ship with Panamanian flag and Cuban crew was heading from Puerto del Rosario to Tarfaya. The weather wasn’t that good as it was supposed to be in April in African continent: quite windy. This miscalculation brought the ship to hit a rock. Though even after that the captain of Armas decided to continue the movement.

Already after one hour of difficult navigation Armas started to lose its speed. The technicians went down to see what was going on and what they saw was a water path “of considerable size”. Just in few minutes the ship lost level and the evacuation protocol went off.

The ship at that moment was in five kilometers from the coast. The saddest moment that on the ship there were only two lifeboats…. while the number of passengers was reaching 113 people.

Firstly, women and children were saved, while men needed to stay on the deck. In the rescue operation local fishermen took part. They didn’t have any life-saving skills but due to their big heart and courage, everyone was saved from Armas.

Unfortunately, even after that the suffering of passengers didn’t stop. They needed to wait for six hours until they were finally taken to hotels in Laayoune.

“They have left us lying down, treated like animals and they have not given us a cup of coffee,” said one of the passengers of Armas.

People lost everything on that ship: cars, suitcases, clothes, money… They couldn’t take it back. As well as the thieves. After the drowning of the ship on the coast line was put a 24-hour security, that doesn’t allow no one to reach the ship.

Since that time also the maritime communications between the Canaries and the closest point of the African coast were interrupted. There are cargo lines that connect the archipelago with the ports of Casablanca and Agadir, but not to a passage. That’s why people are supposed to take a plane to arrive here.

Every time the officials of Morocco promise to open the line again, though every time thy postpone the opening for six more months. And then over and over again already for seven years. Last time they promised to start operation in the March of 2017. Though since now nothing changed.

Just near the coast line from where we were looking at Armas, we have seen another “cemetery” of small abandoned boats.