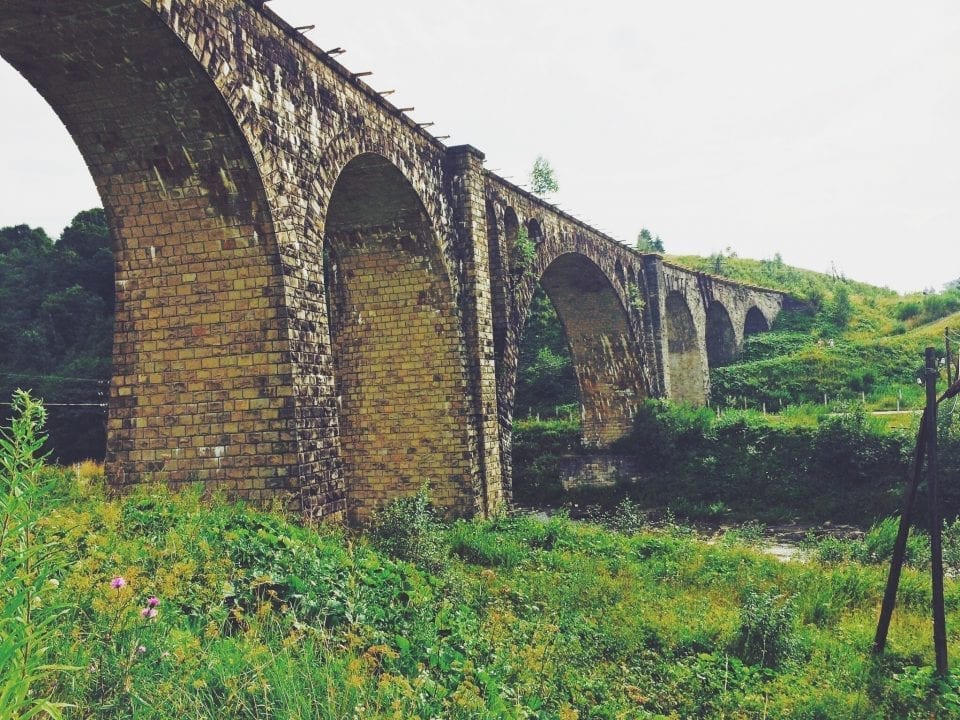 In the Carpathians you can find a small unremarkable village Vorokhta, in which there is absolutely nothing, except the incredible beauty of nature and the unique stone bridge – viaduct. The bridge reminds of something like the Glenfinnan Viaduct, shot in Harry Potter. But this one has much more interesting history.

We got to the bridge by hitchhiking from Yaremche, the driver took us straight to the bridge. We recommend this mode of transport as the best one!: D

In general, you can get to the bridge from Ivano-Frankivsk, as well as from Rakhiv. There are some trains and minibuses.

In any case, you will not miss the bridge: you will pass it. If you still missed it, ask the locals, everyone has heard about it.

In distant and distant times Vorokhta and all Western Ukraine was a part of Austria-Hungary; this left its imprint on the architecture of the town. Until now, here you can find evidence of former domination.

The Vorokhta viaduct is part of the grand design of the Austro-Hungarian government, according to which they wanted to connect Adriatic Sea with the Black by Railroad. The decision to build the bridge was taken in 1870, and the construction began only in 1894 (three years earlier than the Harry Potter’s Bridge!).

The road and the viaduct were built by Italian captive soldiers, as well as foreign and local workers – such a grandiose construction promised good wages, although it was quite hard labor.

Viaduct turned out to be really great: the length of more than 130 meters, the width of the central arch was 25 meters, laid out of huge blocks of stone.

Today, the Old Austrian Bridge is one of the five stone bridges-aqueducts, which were preserved in Western Ukraine, and at the same time the oldest and longest. Next to it, a new railway bridge was built, which since 2000 took over the operation of the trains between Ivano-Frankivsk and Rakhiv.

According to local residents, earlier, when the train was approaching the village from one bank, he greeted the residents of Vorokhta with a whistle, then circled the city center along a wide arc at a height of several tens of meters and proudly disappeared behind the turn, as if dissolving … At one point the train seemed to float in air, because the width of the upper part was very narrow. 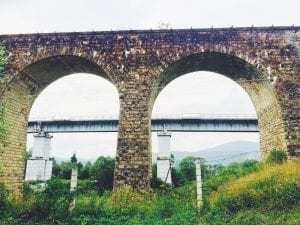 The place where the bridge is truly peaceful. We went to the village only to see this viaduct, and it was not in vain.

… Everything around was green, cows were mooing, birds were singing, a river was babbling. We laid under the bridge with my Italian boyfriend and wondered if his ancestors could have been involved in the construction of this incredible monument of human labor? Of course, there is no answer …

And somewhere alongside, on the already new bridge, a train passed quickly. He no longer greeted the inhabitants of Vorokhta … 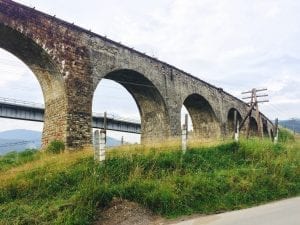