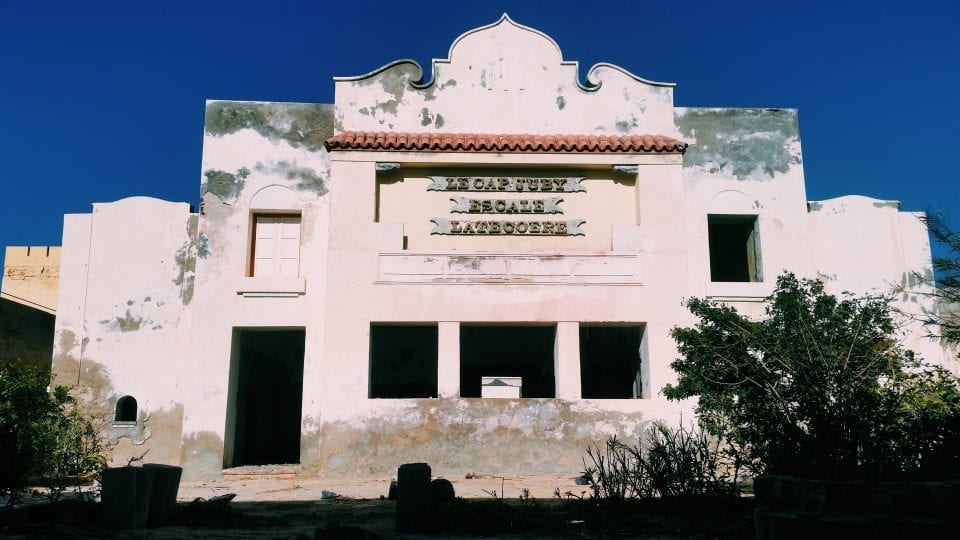 When the Little Prince was flying above these edges both cinema and the Fort, built during the Spanish occupation of Morocco, were alive. Maybe he was inside there, he watched movies, he talked with soldiers. Remember? He was so much curious about everything… Then Prince returns to his “asteroid 325”, Tarfaya returns to Morocco, and those sights gradually fell into disrepair.

Today we will visit beautiful city Tarfaya, that is located in southwestern part of Morocco, not far from the border with Western Sahara.

Spanish cinema and the Fort are located in the city center, close to the museum, dedicated to Antoine de Saint-Exupéry.

Starting from 1912 the territory of Tarfaya was occupied by Spain as part of the Spanish Sahara. Even the city itself was called Cape Juby. The city was returned to Morocco in 1958, after the end of the Ifni War.

During the Spanish occupation there were built many new infrastructure, some of which are left till nowadays.

Spanish cinema was one of them. It was built in 1933 to distract Spanish soldiers with Spanish and American movies. Even after Spanish soldiers left, the cinema was operating, showing different movies to the citizens of Tarfaya, until 1993. It was closed because of its half-abandoned state, and also because it was hard to get the films. 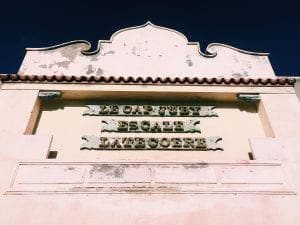 Another interesting historical place – The Casbah of Tarfaya. It was built to protect houses and residences of Spaniards who occupied Tarfaya. Like all Forts it contains a gate, solid walls, and guard towers.

Returning from the lamentable Armas to the city of Tarfaya, we decide to visit the museum of French author Antoine de Saint-Exupéry. But on our way to the museum we unexpectedly bump into two beautiful abandoned buildings.

Around us many children that are playing inside, hiding from their parents and smoking the cigarettes. When they see us they trying to explain in poor French what was inside these buildings before. From that moment they are and they will be our little tourist guides. They show us every particular of the place, meanwhile asking many times what is our name and from where we came from.

We come in an open area, with a thumbnail of a building in the center, which remember us a lot Casa del Mar. They explain here there was a lion (fake one obviously) which spat fire and people behind who were acting using puppets. The next place is the Cinema area. Children start playing in cassier and selling us tickets, from another window they are trying to sell us popcorn, then they lead us to the roof and provide us with the best places in the cinema. We turning on the Screen, and here is The Little Prince back to this land again…