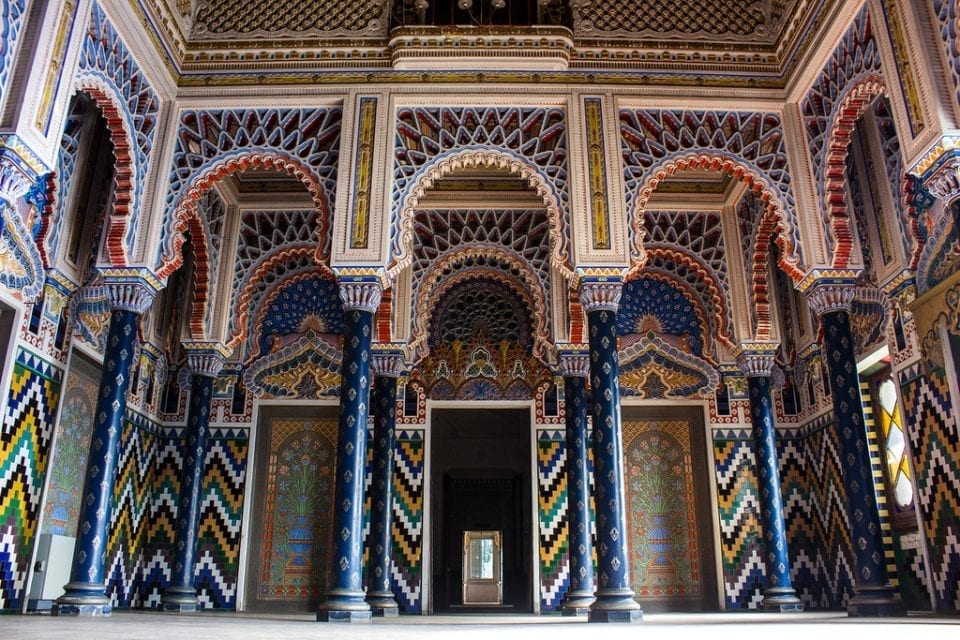 While I was searching for different locations for my hitchhiking tour around Italy I suddenly stumbled upon the photograph of the castle of Sammezzano. It was then, after a little shock, when I immediately realized: I definitely want to go there. Multicolored rooms, orientally intricate patterns, the iridescent game of stained glass on the walls – all this seemed to be seen in a dream or an opium journey, but not be a stone-marble reality.

How to reach it

The castle is located in a small Italian city Leccio, 30km away from Florence. It is located up on the hill, and to reach it you will need to go 1,5km by foot through the beautiful park. Though to make it easier you can just follow the map which we added in the end of the article.

In 2013 the Committee FPXA (от Ferdinando Panciatichi Ximenes d’Aragona) started to organize several excursions each year inside a castle. They say that these visits were “sold” out almost immediately: the last opening for a full day of tours (750 spots) filled in only 27 seconds!

So, there is no way to get inside, unless you are a celebrity or rich person, unless in an illegal way, what we actually did.

To get inside we needed to act as Peter the Great – to hew the entrance. The knife that we previously took with us helped to cut the hole inside the window. Plastic board, which blocked the broken by someone before the window, easily cracked under the blade.

The Internet gives us lots of contradictory information about the history of the castle of Sammezzano. But at least all sources agree that the history of this place starts from the VIII century. Influential and richest Italians alternately owned this estate. Among them the Medici, from whom in the XVII century it passed to the Ximenes d’Aragon family, who, as the site dedicated to the castle declares, built the main building (though other resources, most likely mistakenly, say that the castle was built in the year of 780).

But one thing is known for sure, the present appearance of a castle was established less than two hundred years ago thanks to the marquis Ferdinando Panciatichi Ximenes d’Aragona. Although Ferdinando had no higher education, he was Tony Stark of his time – an engineer, entrepreneur, intellectual and philanthropist, and at the same time a politician, a bibliophile, an architect and a connoisseur of Dante’s work. The marquis with great attention and respect for the eastern culture and, inspired by the Arab palace of the Alhambra in Spain, decided to finish his castle in the Moorish style. For this he dedicated 45 years of his life.

He made the design of each of the rooms of the castle unique, and it is just left to wonder by architects’ contrivances of Ferdinando. For example, in the center of the White Ballroom there was a fountain from which flowed eight other small fountains.

The room is designed so that the setting sun stains the streams into the scarlet, passing through the red stained-glass windows. And on the day of the summer solstice, the rays seem to wash the walls of the hall, leaving the visitor in a circle of light.

On three sides of the two-story Music Hall there are balconies, from where the musicians’ play was broadcast all over the castle.

The most colorful hall of Sammezzano, that provokes some thoughts about strange addictions of his creator, deservedly bears the name of a peacock. Marquis dedicated this room to Dante and hide here a puzzle, the clue to which lies inside the poetic heritage of Italian poet.

Ferdinando was much ahead of his time: like the users of Facebook about seven years ago, he fixed his chosen thoughts on the wall – rather, the walls of his castle.

“Those who are intelligent, educated and worthy, in the end, receive a well-deserved recognition,” – flaunts in the entrance hall. “It does not matter how much money you have. No matter how many of them there are, you will still encounter difficulties and obstacles that will have to be overcome. And the money here will not help,”- is listed in another room.

The guests of the castle could easily recognize the oppositionist inside marquis. “The Italian government is worthless, but even worse is the realization that we have such a government as we deserve,” angrily said in the smoking room. “We are against everyone, and everyone is against us,” Ferdinando said, it was the motto of his political life.

There are also other interesting quotes that can tell us more about Ferdinando.

“The crowd is booing me, but I’m spitting on it”, “Dogs always bark at a lion”, “Every truly strong person is alone in this world.” Ironically, these notes can be read in the so-called Hall of Lovers.

About the future history of the castle can be found only a little. During the Second World War, a hospital was located here, and in the late 1970s a hotel was built here for 18 rooms. In the castle weddings were played and celebrations were held.

In 1999, the owner of the hotel went bankrupt, and the castle stood in desolation until 2013, when members of the local municipality organized a committee of the FPXA in honor of the 200th anniversary of Ferdinando to save the castle.

Information from other stalkers, found on the Internet, was upsetting, someone for penetration needed gymnastic skills, but most of them left the castle without getting inside. The lack of tools didn’t add any hope for us. To believe, that among this splendor will stand I, in dusty boots, was almost impossible.

Therefore, in the morning, when we were supposed to leave Florence, I was almost tempted by the offer of the host to give us a lift to a convenient place to hitchhike towards Rome. But my fellow traveler persuaded me to at least try, and a couple of hours later, climbing the hill and hiding backpacks in the bushes, we stood near the main entrance to the castle.

Its facade, to be honest, did not make a strong impression. It was hard to believe that this brick-pink building hides from us 365 rooms, which were described by numerous articles about Sammezzano. To admit, for such an exterior I would not go even to the neighboring region.

Though after we got inside we saw the oriental fairy tale. 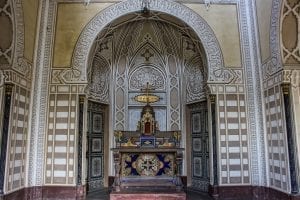 We could not understand whether there were really 365 rooms in the castle, but at least four hours we spent on photographing the second and third floors (at first floor we decided not to go because of the alarm). When we found the strength to stop, it was already about five o’clock in the evening. We were waiting for an unpleasant surprise: the castle was surrounded by tourists from all sides. Probably, it was a stupid idea to climb here on Sunday. We didn’t want to get out through a plastic hole under the sights of cameras of Chinese, so we opened the window in the end part of the castle and teleported to the ground for thirty seconds.

Mingled with the crowd, we felt a sense of envy towards ourselves: unlike the others, we looked inside the heart of Sammezzano.

2 thoughts on “Castle of Sammezzano”