This summer, I traveled around almost whole Kazakhstan, and on my way now and then came across various abandoned cities. In the times of the USSR, the extraction of minerals was developing really fast, but  after the collapse of the soviet union, nothing because of money remain and everything fell into decay… This is what happened with the city of Zhanatas, Kazakhstan, which we will visit today.

Many Kazakhs themselves do not know where this city is located, even those who live nearby. The easiest way to get to the city is from Taraz. There once per hour there are buses. Despite the fact that it is a ghost town, people still live in it.

Arriving in the city, I was a little disappointed. I expected to see a real “ghost town”, but in the end there were some people in the city. The town itself is small and the abandoned quarters could be seen right from the center.

Young people immediately prompted me that the city is divided into districts and in each district there are several abandoned houses.

But here I was again disappointed. Instead of something beautiful, full of Soviet past, I was greeted by usual abandoned boxes. Inside there was absolutely nothing, no wallpaper, no tiles, no posters. Only bare walls and ruins… All this is right next to apartment buildings, where people still live.

But let’s remember what Zhanatas was long before that?

The city appeared on the map of the USSR in 1969, it was the pride of the chemical industry, many high hopes were inside the city. People from all over the country gathered in this city to build a happy future. Literally in a few years, the miners’ town grew into factories. Together with the plants there were also recreational conditions for the townspeople: the city was changing right in front of our eyes.

A hospital, a Palace of Culture, kindergartens and schools, dormitories for workers and students were built. A whole house-building plant was also built, as it required the construction of housing and the modernization of factories and plants. In a word, the city lived its own life. The developed infrastructure and conditions for a normal life made it possible to consider the city to be developed and modern.

The city started to die with the collapse of the union. The first “internationalists” left the city. They thought that everything would be different from now, and they were not mistaken.

Then the breakdown in the links of the industrial chain led to the fact that the company for which the city was created could not provide not only the city, but also its employees with wages or social benefits. This was explained by the lack of cash. 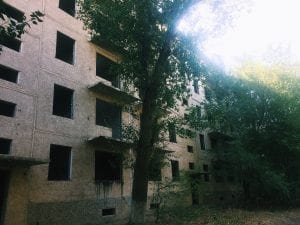 The rest of the staunch part of the Zhanatists could not believe that such a “big machine”, which was providing phosphorus for all the great country, would one day become unnecessary to the state. But the new state had other problems at that time. Therefore, the management of the plant itself looked for partners and established a sales market. But at that time all the money had to be converted, passing through the state bank, and therefore they were stuck in the government. Workers were not paid money, investors stole them… The only thing left for people was to go on strikes and pickets. The government did not like it and punished them. 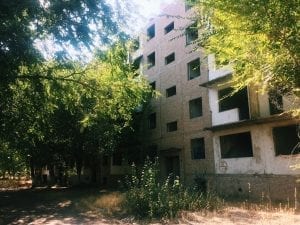 Electricity was supplied for two hours a day, there was neither hot nor cold water at all, and most importantly there was no money. These seemingly elementary things, without which life does not seem to exist in modern society, could not afford the Zhanatians. Since then, little has changed.

Today in Zhanatas there are a little more than 20 thousand people. These are the ones who do not have the money to move away. They either trade in the markets, or go to the nearest Taraz for work.

Entering in this city, it is very difficult to believe that this is the place where all the main specialists of the country sought during the time of the Soviet Union … But it is our history as it is.

Catacombs of Paris - Museum
Ghost Town of Akarmara
Lopatinsky Mine