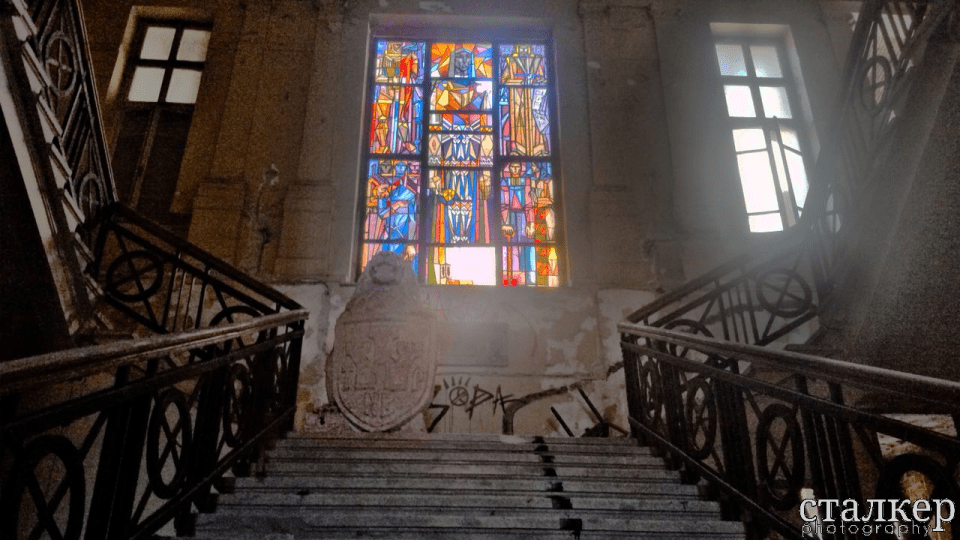 He is a lion, but also a guardian, because he sleeps with his eyes open; that is why it is placed in front of the doors of the temples.

Veliko Tarnovo and its treasures

After the Old Post Office you will need to move a few hundred meters to get in front of the Tsarevets Fortress. Before setting foot on the bridge and starting to visit this spectacular fortified complex, you will have to turn 360 degrees and here you will see the abandoned building in front of you. To get in you just have to walk around the structure, take the stairs to the back, and enter through a semi-open door. 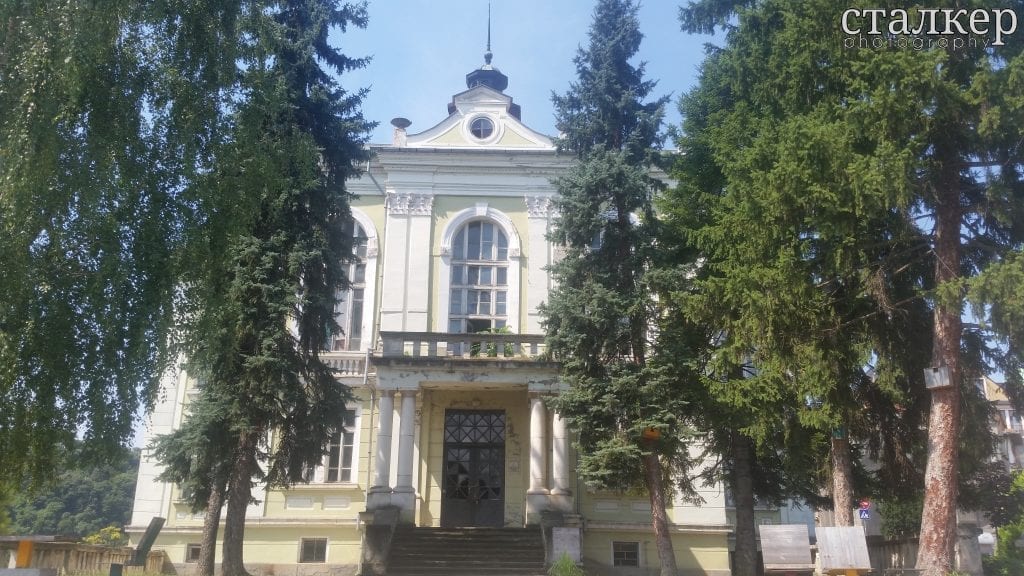 Georgi Kozarov and the District Council

This huge building was used to be a district council (or district court of auditors). It was built in 1911 because the council building burned down in 1906. Before that there was a mosque and a garden. Several architects were undecided about what to build, and they made several design assumptions about what it should look like. In the end they decided that it should be a combination of all these ideas. The main architect of this combination of views was Georgi Kozarov.

The palace has 32 large rooms and was the first building in Veliko Tarnovo with its own heating system. There was a large clock above the entrance, but it was destroyed in the great earthquake of 1913. The lion inside is only a copy of the one at the entrance of the fortress.

Dark roads surround our minds, and smells of excrement creep into our nose. Everything is damp and wet, with wooden pieces and beams projecting from the wall, others bursting from the floor. The rooms are full of memories of a past lived by some homeless. In some sort of reception there is a calendar and newspapers hanging on the walls, while plates and trays are arranged throughout the table.

Exiting from the dark and venturing into the light we find the stairs that lead us to the underground. Slowly slowly, keeping in mind the wooden stairs, we go down. One at a time we visit the rooms. What a terrible chaos! In some we find only newspapers and crap. In other real treasures. A room filled with old magazines, film tapes, propaganda posters, and playbills. Another room, however, is completely covered with posters, even used to cover the windows so that it could not get in the light. Above some furniture there are cups, drawings, saucers, bottles, medicine and more. In a piece of furniture we find fingerprints that point to those of a small child. Even further down the floor, at the minus two, a huge furnace, surrounded by bricks and ivy that goes down from the ceiling like a lava. 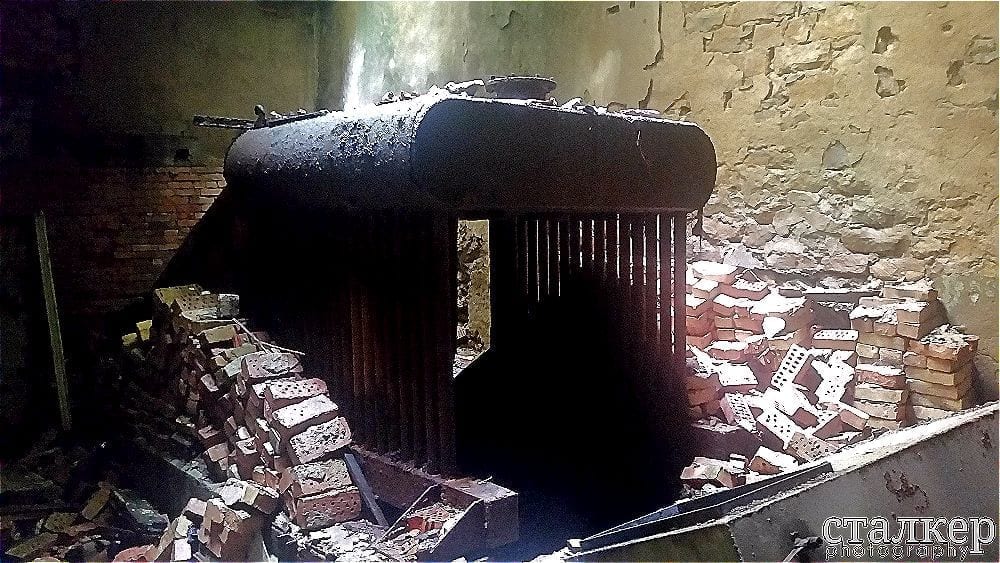 Let’s go upstairs, on the ground floor, where also here we bump into something of extraordinary. Wooden boards with attached photos of people, and other historic photos are scattered across the room and corridors. In another room it seems to be in  asylum, imprisoned and detained as if we were a patient who wanted to commit suicide. All the walls are painted in blue, and behind these plastic squares emerges yellow foam. In what appears to be a classroom, we learn that this place also contained archaeological finds. There are photos of antique vessels and the floor completely covered with pieces of rocks. Could someone come and break them? I just hope this is not the case and that what we have under our feet are just copies.

Finally it is the time of the main hall. To collapse in the twilight are the Doric style columns leading to the stone staircase. At rest but always watch out there is a lion guarding the whole building. Is he guarding at some treasures? Behind the animal there is a huge colored stained glass, such as those seen in churches. Here we are quite discovered because from the main door anyone could look out and see two guys inside who are rummaging. 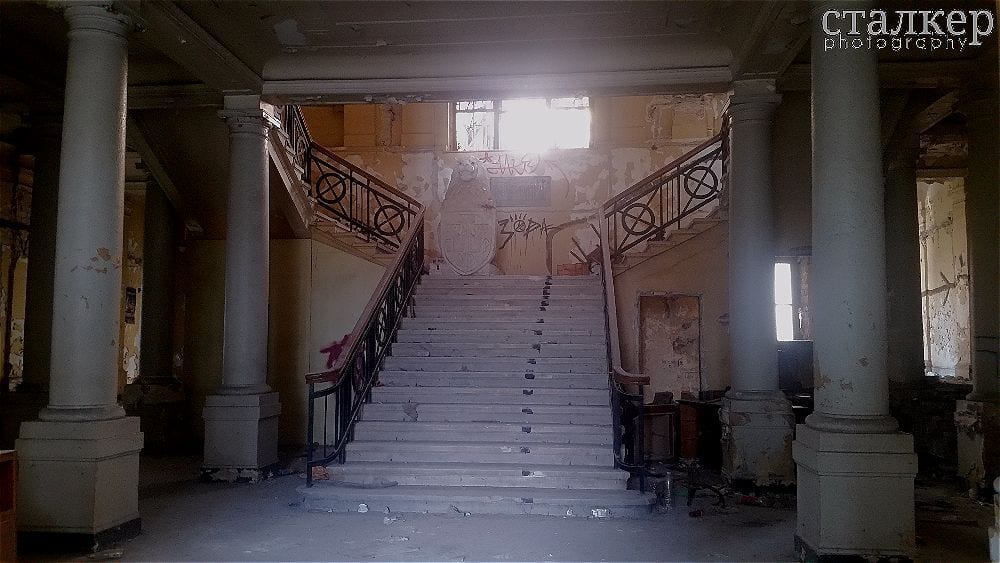 We move to the second floor where, to welcome us, is a spacious room with large windows, whose richly ornate walls have been covered by works by some strange contemporary artists. On a wall, two painted hands emerge from the floor, clamping in their palms some framed ornaments that the artist has succeeded in transforming into portraits. From here we also enjoy the exceptional view of the whole fort and the road that leads to it. Continuing to explore the other rooms, we can find cases, documents, clothes, bottles, trunks and a lot of trash.

For today the exploration ends, leaving us behind a building rich of history, left as well as other abandoned places at the mercy of time.