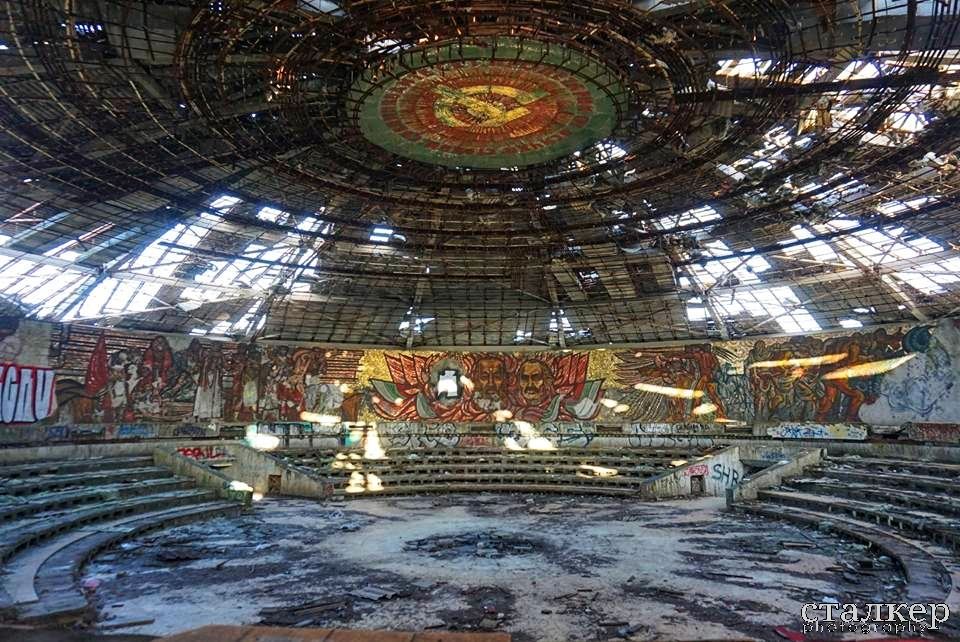 “We are ready to leave, Mr. President, we turn on the engines?” The operators ask the president. “Light up” Todor Zivkov replies coldly. Countdown: 10, 9, 8, 7 … ..2, 1 … .partence! And so it was that the spacecraft Buzludzha took flight for the deepest space.

The Buzludhza (in Bulgarian: Бузлуджа, in Turkish Buzluca – literally “icy/icy”) monument is situated on a historical summit of the Balkan Mountains in Bulgaria, at 1441 meters of height. To get there you have to go along two mountain roads, not paved and in the woods. One leave from Kanzalak (south of the mountain) with a total length of 16 km, the other one from Gaborovo (north of the mountain) through a 12 km long road. At the foot of the mountain you will be greeted by a sculpture representing two hands holding torches. From that moment you will have to make a climb of 15 minutes (on foot only, there is no space for cars).

Entering is neither easy nor difficult. Many have given up on exploration simply because all the main entrances have been walled and every access are blocked. In reality, at the side of the structure there is an underground passage, easily visible. Just drop down with a rope (if you do not have one, do not worry, some altruist explorer has decided to leave a plastic strap and tie it to the boulders). Once inside it will simply be necessary to go back up the whole monument from the foundations to the amphitheater, among ruins and rubbish, up to the main hall.

!Be careful, they have now walled up all the passages and put a guard on the monument!

The construction of the monument began on January 23, 1974 under the architect Georgi Stoilov, former mayor of Sofia and co-founder of the Bulgarian Union of Architects. The TNT was used to level the mountain top in a stable foundation, reducing the height of the mountain from 1,441 meters to 1,432 meters. More than 15,000 cubic meters of rock were destroyed in the process. The monument was built at a cost of 14,186,000 leva, which according to today’s rates is approximately $ 35 million. 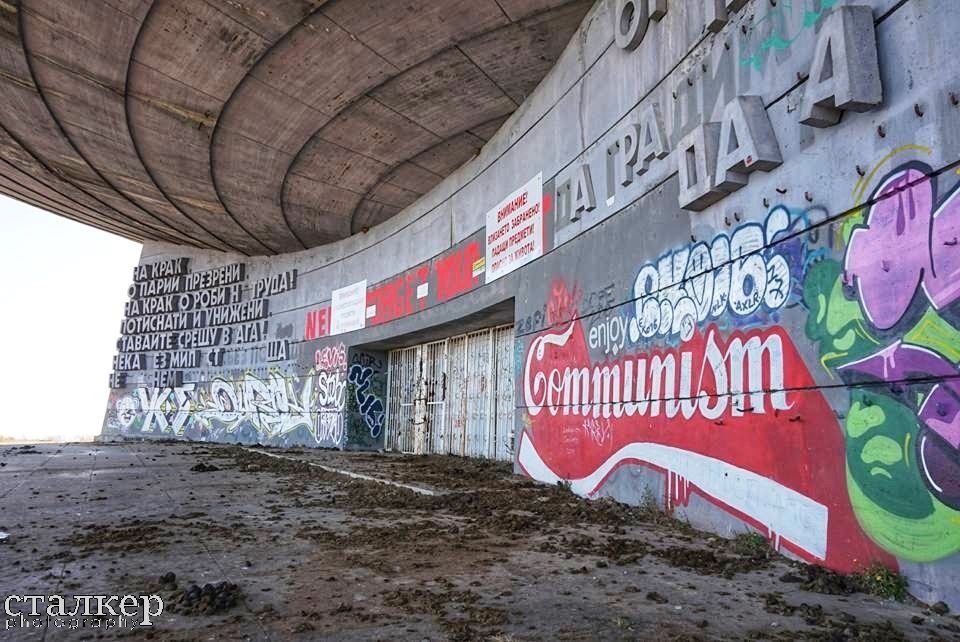 The Buzludzha monument, inaugurated on 23 August 1981, was built on top by the Bulgarian communist regime to commemorate the events of 1891, when the socialists led by Dimitar Blagoev secretly gathered in this area to form an organized socialist movement, which gave life to the Bulgarian Social Democratic Party (predecessor of the Bulgarian Communist Party).

Not to mention the events of 1868 in Buzludzha where it took place the battle between the Bulgarian rebels led by Hadji Dimitar and Stefan Karadzha against the Ottoman Empire.

Today Buzludzha is no longer cared by the Bulgarian government, it has thus fallen into disuse becoming a destination and meeting place for vandals and writers. 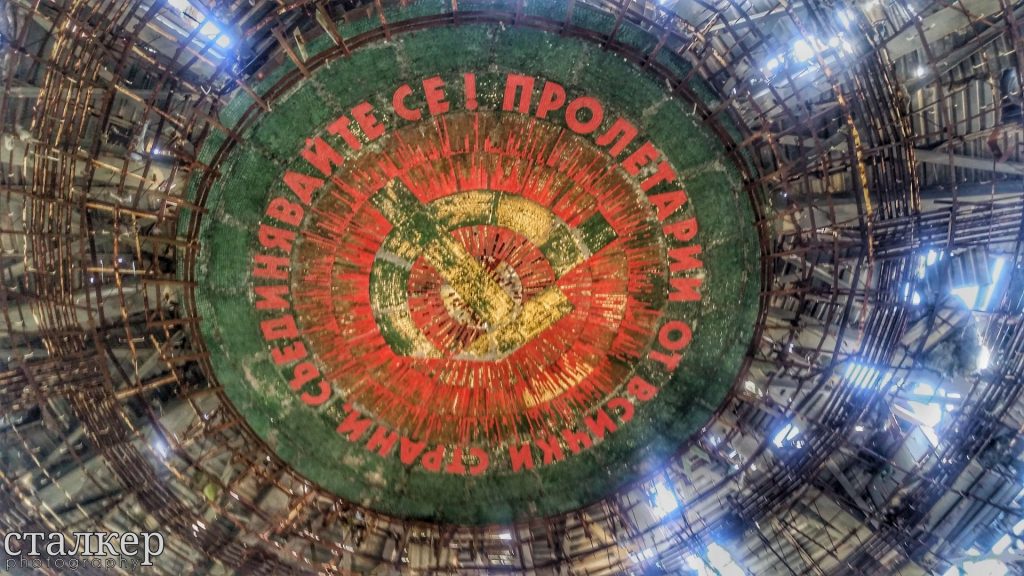 The monument stands majestically on the summit of the mountain, dominating unchallenged over the whole valley. At this moment I realize that all the photos I saw, which portrayed Budludzha from every angle, could never hold the comparison from the real life.

Climbing with the 75 liter backpack and the leg still injured by the accident in Chernobyl, makes the venture even more difficult. However, walking slowly also has its advantages, as I can fully enjoy the view from the Buzludzha mountain.

“Of course I can feel the difference in temperature compared to when I was in Etara”, I think to myself.

Arrival in the square in front of the monument at 3 pm, without even having any idea how to enter. There are many people who take pictures, who walk around the monument, who observe and examine it. I ask a Bulgarian couple to take a picture of me, as well as some information on how to get inside and if they can give me a ride inside their car to return to the valley. They give me 15 minutes because they were just at that moment leaving the place. 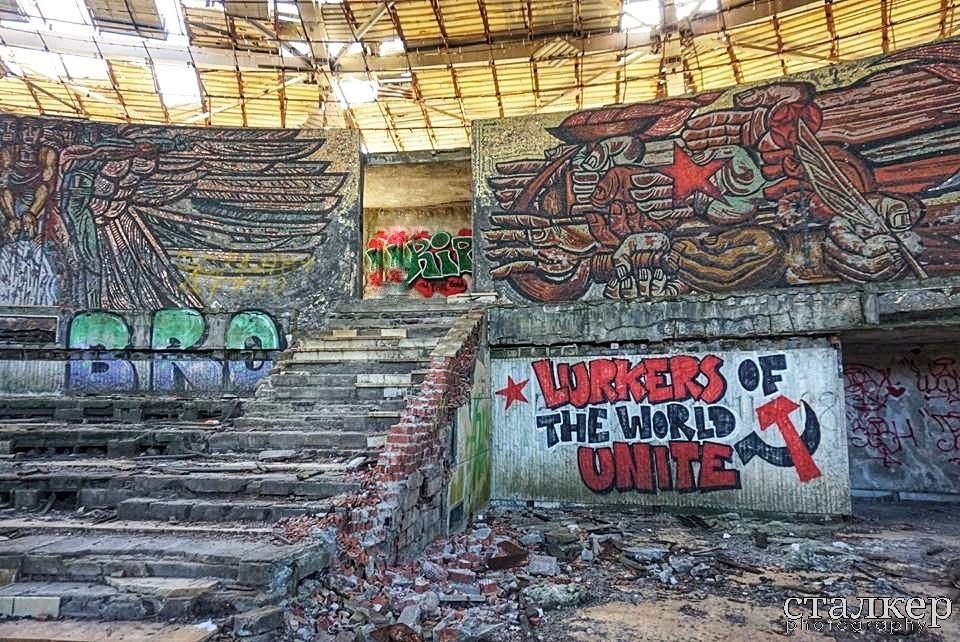 …I hasten to find an entry, as the couple could not provide any information about it. Along the structure I find myself at a point where I see this hole in the cement, with a plastic tie at the side. I light up with the flashlight and immediately realize that this is the entrance I was looking for. I leave the backpack near the hole and carefully I fall down.

I am immersed in the darkness, overwhelmed by a thousand smells. I begin my climb through dark corridors, collapsed staircases, floors that look like colander and finally I arrive under the lobby, from where I can see the entrance gate, sealed and well packaged. A flight of stairs leads me to the main hall. The emotions that you try to see live are indescribable: an area designed to accommodate the rallies of the great Communist leaders and that even today, during the meetings of the Bulgarian socialist party, easily welcomes between 30-40 thousand people.

The mosaics (built with 35 tons of cobalt) covering about 510 square meters of space, are decorated to commemorate the history of the Bulgarian Communist Party. As for the outer ring of the monument, the mosaics were built with natural stones collected from various rivers throughout Bulgaria. Unfortunately, most of these have mostly disappeared due to weather conditions and vandalism. The final mosaic can be seen in the ceiling: sickle and hammer, surrounded by a quote from the Communist Manifesto which states:

“Proletarians of all countries, unite!“

Not having much time and not wanting to leave my backpack unattended for too long, I immediately launch into my photographs. I only do a dozen, failing even to approach these beautiful mosaics. So in a hurry for nothing, I am in fact abandoned by the couple of Bulgarians already running away with their car. 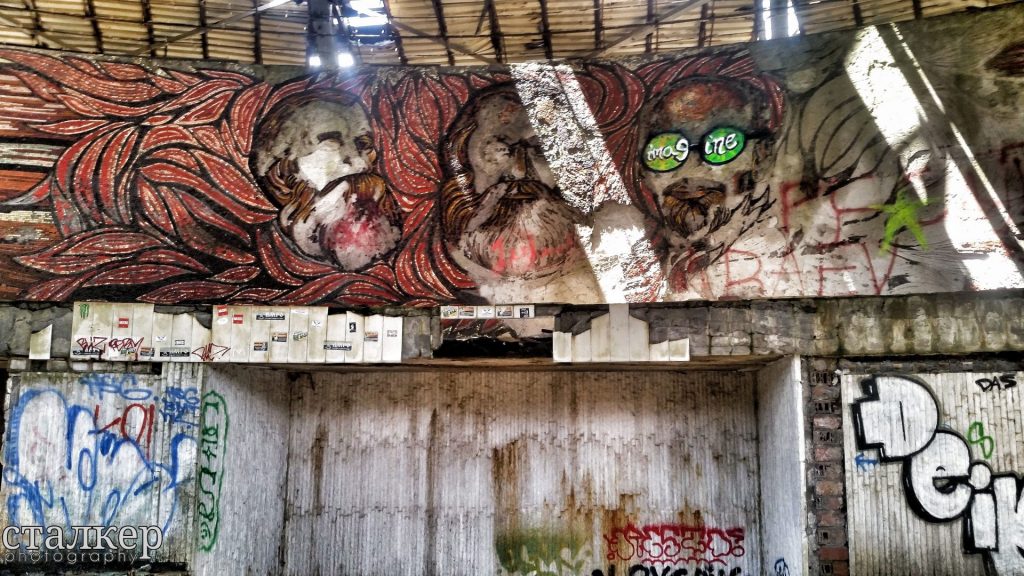