We were heading to Kampot by bus when on our way we saw something that looked abandoned, and without hesitation we ask our driver to drop us close to it, right next to the sea.

We opened out later that the town where we stopped was Kep, famous for its blue crabs. The abandoned villa is located right in the city center, not far from the bus stop. To get inside is really easy, as the fence is low or almost absent in some points.

Instead, if you want to visit the villa from inside you will just need to crawl under the door, as it is half opened. The entrance is possible just from there. 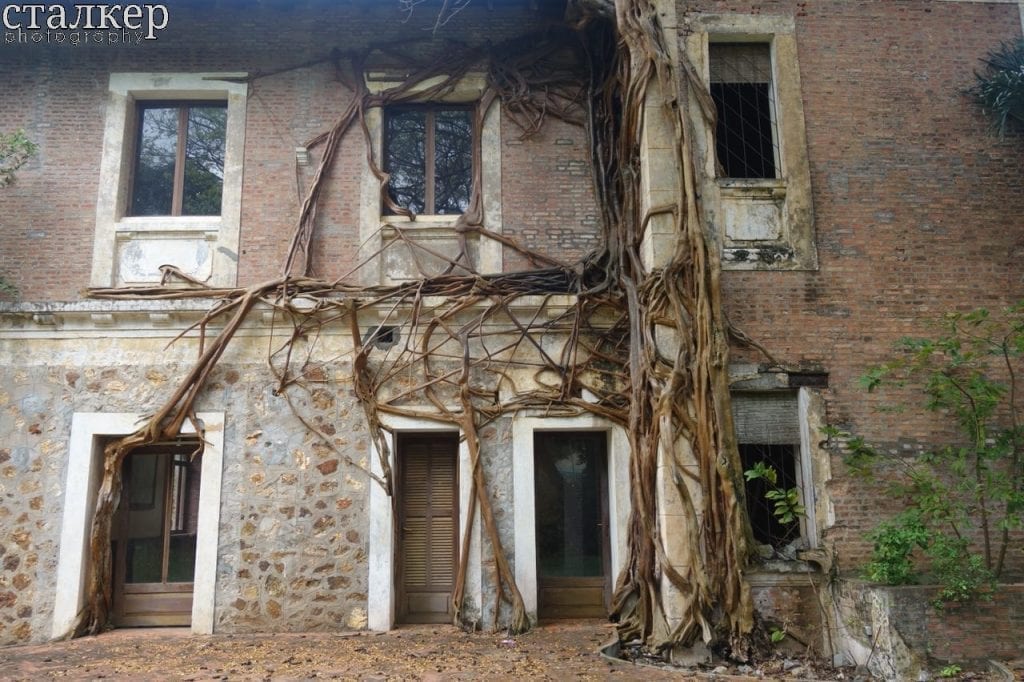 Later searching out some information about this place we opened out that we were really lucky to find this villa. It was built in a long ago 1903 year! At the beginning it was the former residence of Thomas Kieffer, first governor of Kep. And then it housed French colonial administrators on break from their jobs in Phnom Penh.

In 1950 Kep became a famous resort for French people. It was originally called Kep sur Mer (Kep on the sea). But others as well call it “Cambodia’s Riviera,” or, “The St. Tropez of Southeast Asia.” 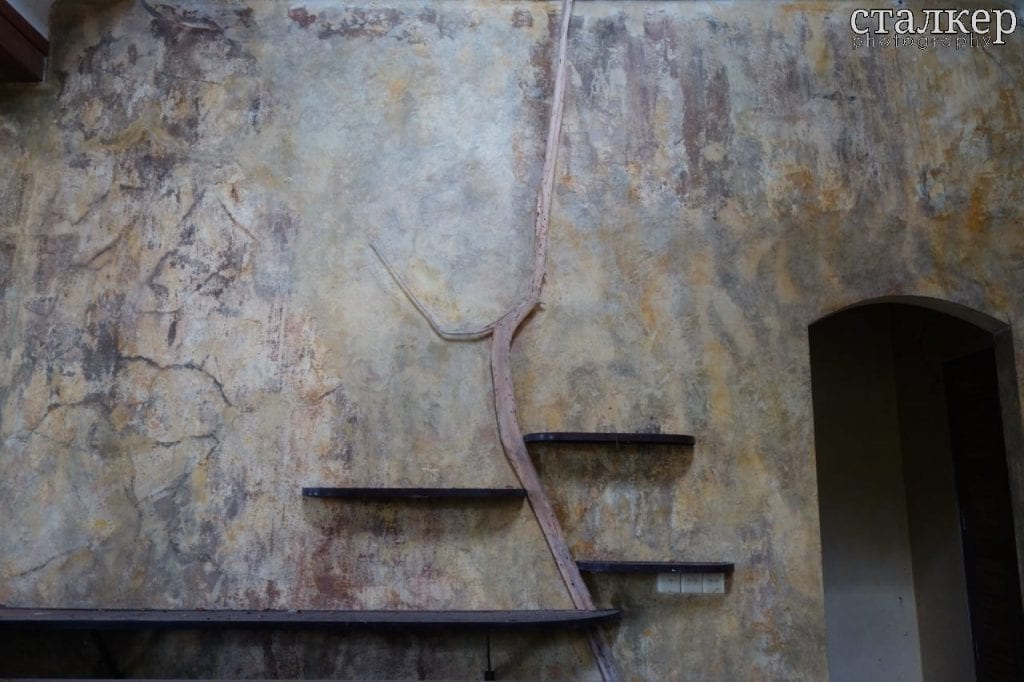 From the New York Times – “… the French colonialists established a beach retreat during their rule here in the first half of the 20th century. They built mansions on the hillsides to catch the gulf breezes, and as in Sihanoukville, the villas’ skeletal remains and shot-up facades are an eerie reminder of the past. Those houses are now being turned into luxury residences and hotels, and new compounds like the colonial La Villa de Monsieur Thomas and the modernist Knai Bang Chatt demonstrate what the future of high-end tourism on the Cambodian coast might look like.”

It all finished in 1970 when Kep turned out to be …a ghost town. At those time was a Vietnamese war and Cambodia was under Khmer Rouge regime. From those “dark” times Kep hasn’t recovered yet… After that many villas were destroyed or began to fall into a decay. 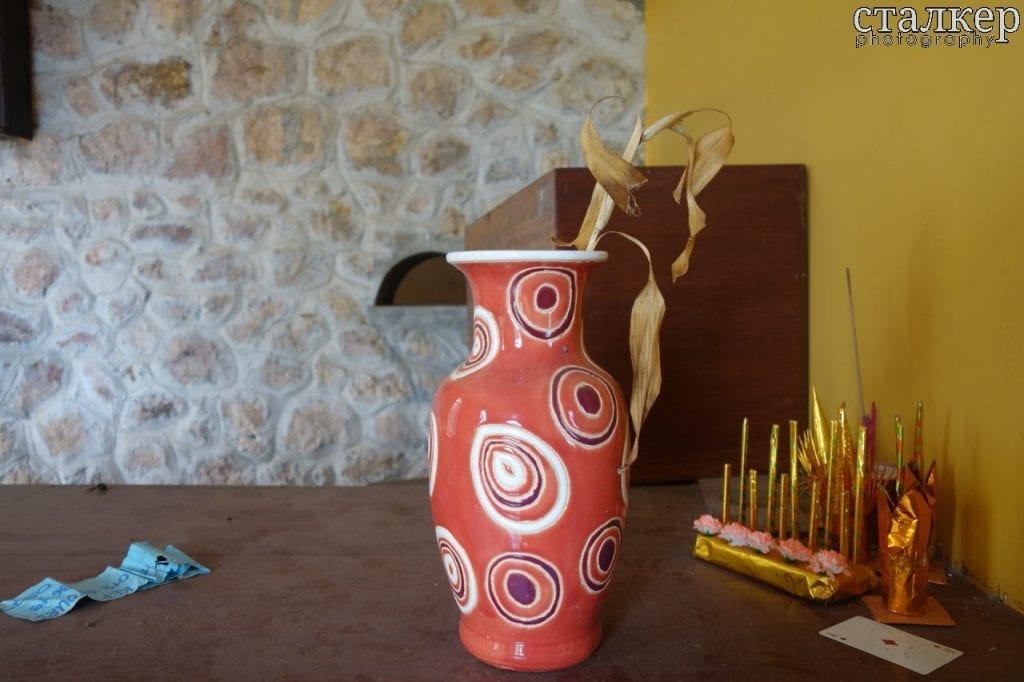 After the fall of the regime villa was transformed into the restaurant, and nearby were built some bungalows that you could rent starting from 30$ to 105$. 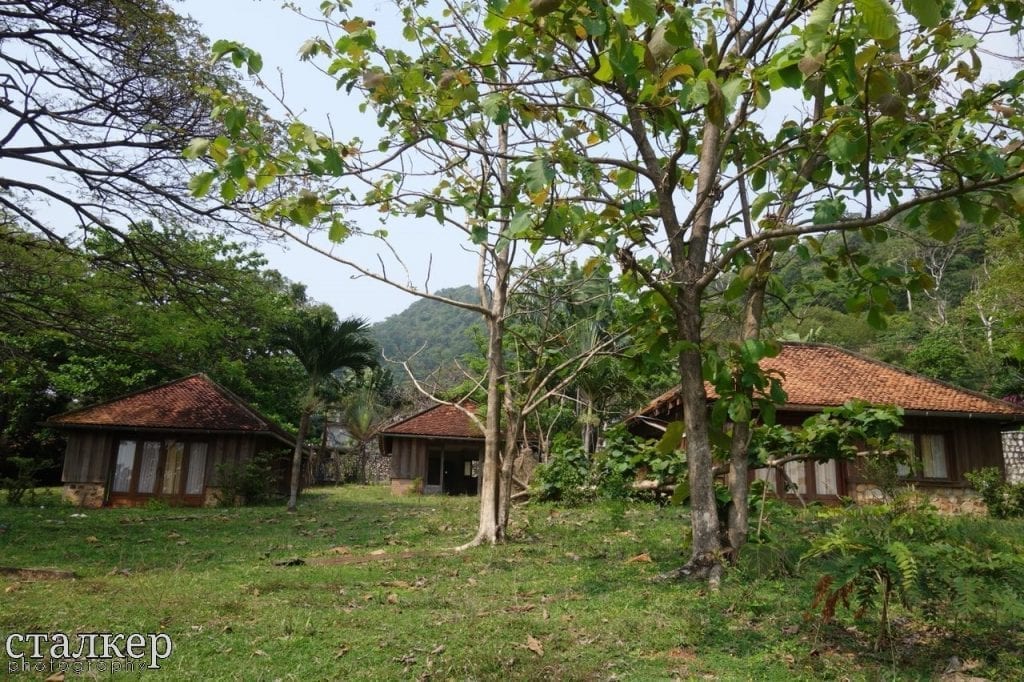 People around told us that hotel was closed at around 10 years ago because the owner of it had some problems with law, by having the ex-governmental house.

Another person told us different story of closure of this place. By him it was closed as the owner had problems with snakes who were appearing every night. So he needed to stop this business. 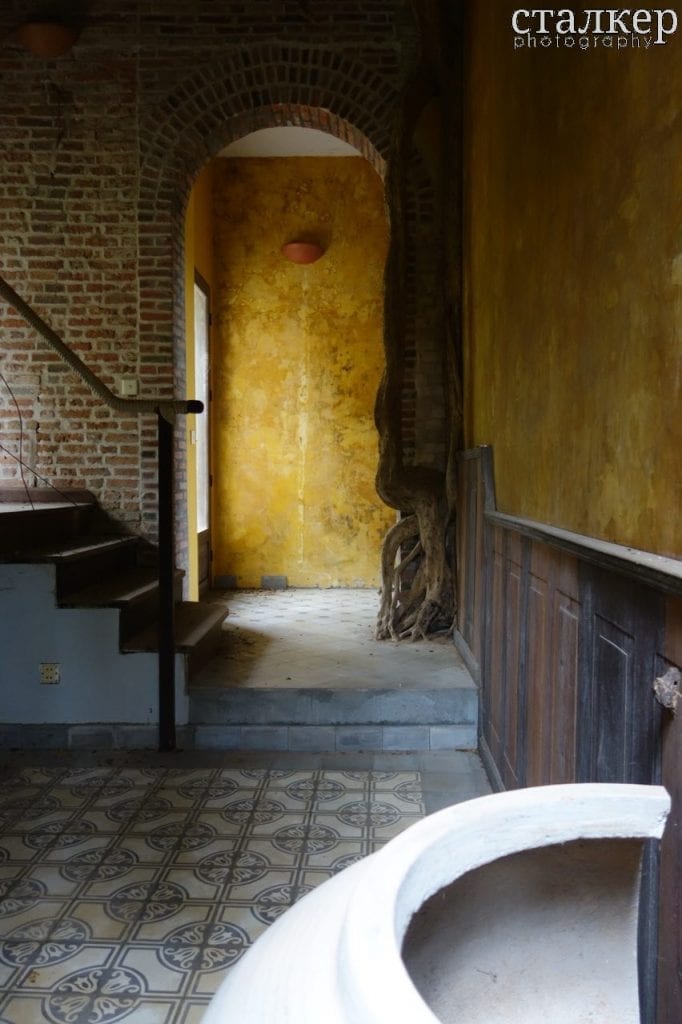 Not only its great history is interesting. What really amazes us is something else that is wrapping the villa all around in every its angle. The tree. Tree was growing all around the house. Firstly we thought that something like that could not be real wood, but later when we came close and touched with our bare hands we understood the opposite. 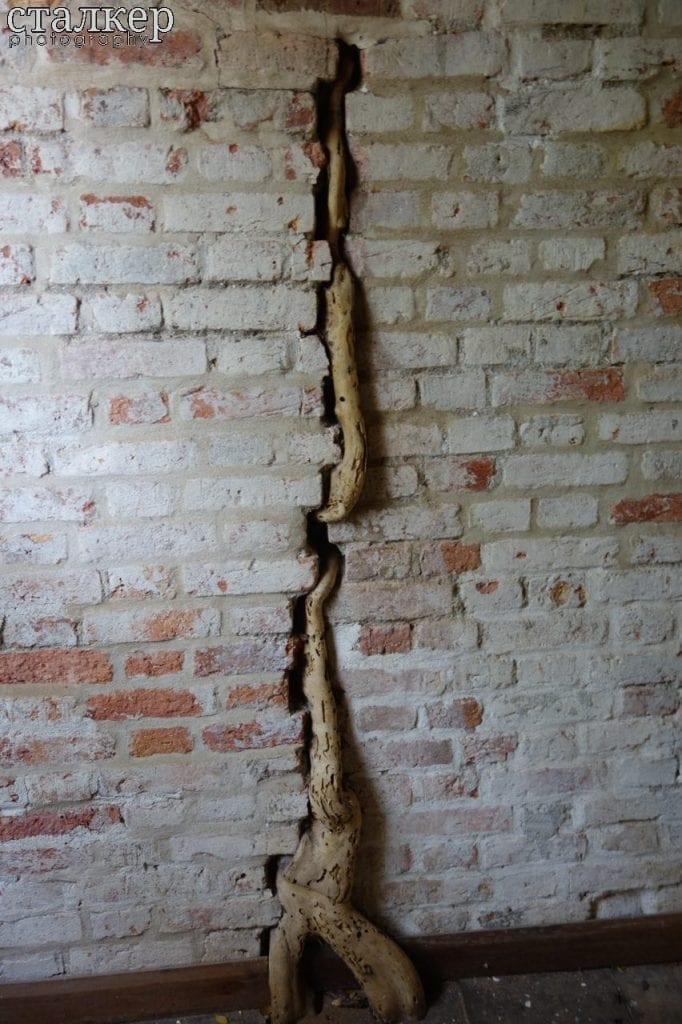 “It is not like a parasite…rather! Tree and villa support each other, they are in a symbiotic relationship”, we say between us.

We tried at one moment to climb with not much difficulty, though in some points we broke part of the tree and left one of our foot in the middle of the air.

“This is a spectacular example of art! Nature and humans creation together, how much lucky we are to be here?!” we say. 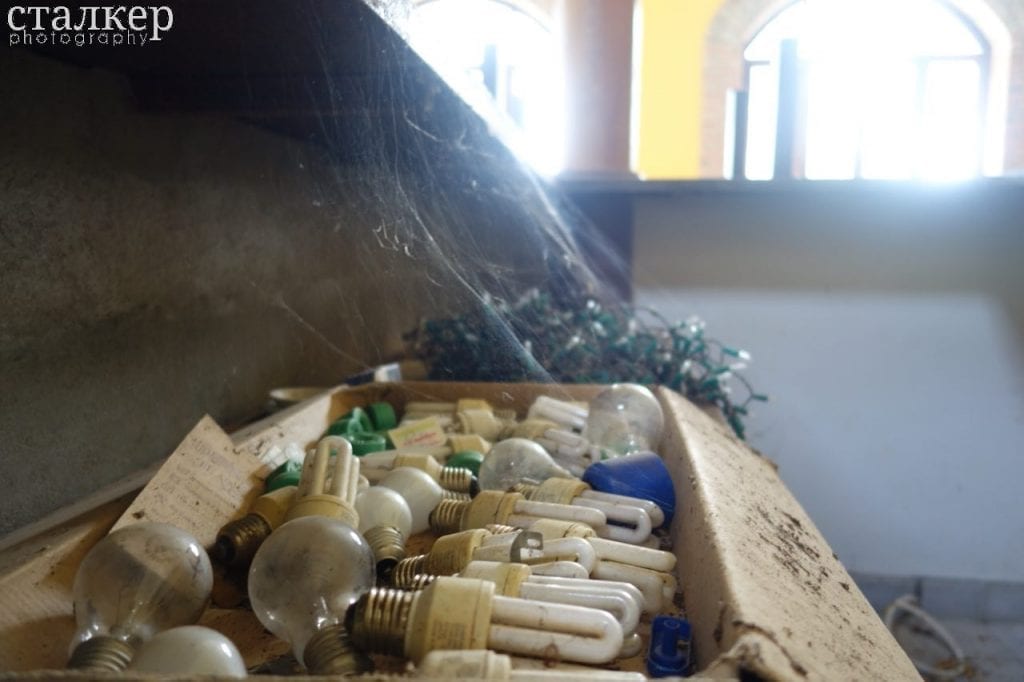 It’s strange but villa remains in a quite good condition even after 10 years of abandonment. Just one window is broken while others are substituted with some iron fences, glimpse the interior.

When we come inside the house many subjects remain there. Wooden chairs, old style clocks, vases, lamps… 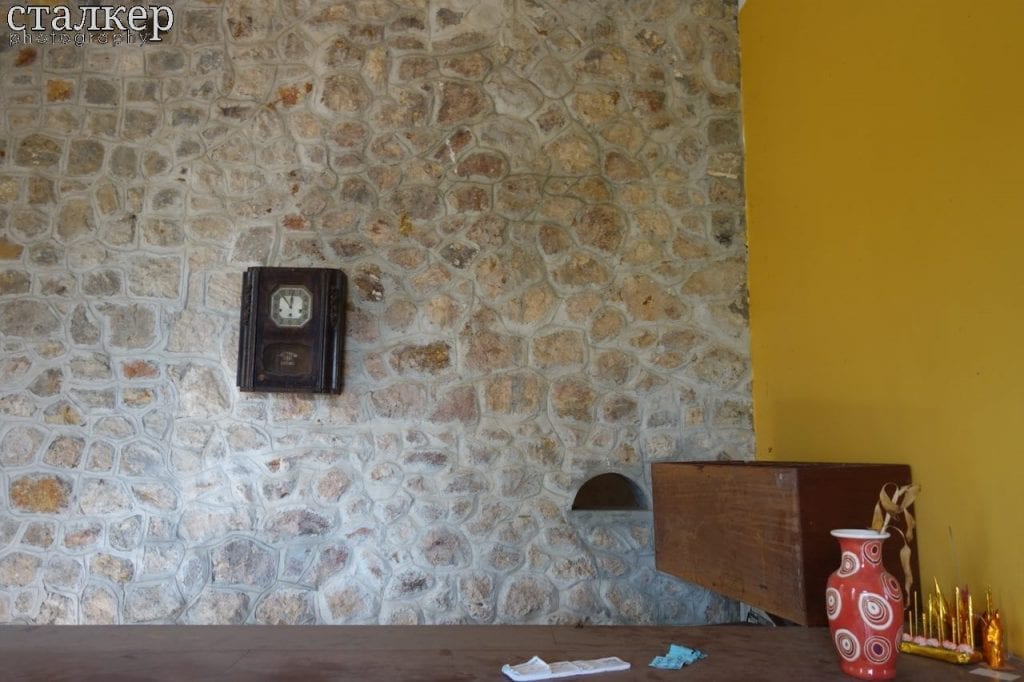 The house has three floors and you can go till the up where birds live. When we came there we accidentally woke up them and birds flew away. The tree was able to burst inside not roughly and gently covering most of the walls. Although now it seems that its grown stopped and it lies motionless in guard of the house. 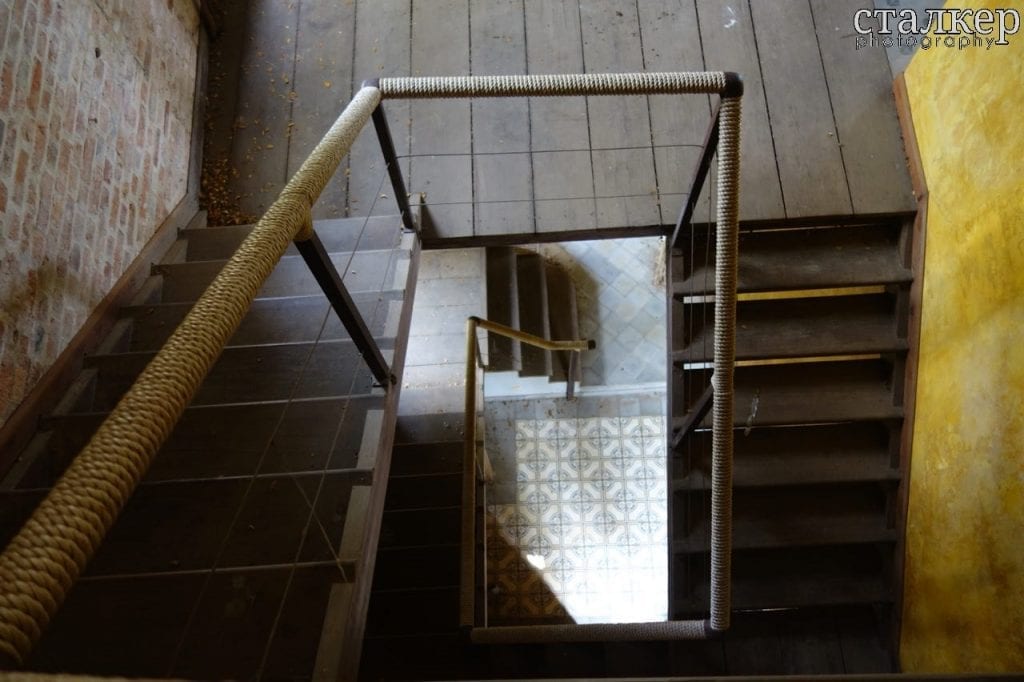 Except the building itself there are some bungalows on the territory of the old villa. Inside them you can find some elements of furniture, like chairs and tables but not that many. Also there was an outside kitchen with some plates in and a small temple that should protect the place from the bed forces (and ghosts). 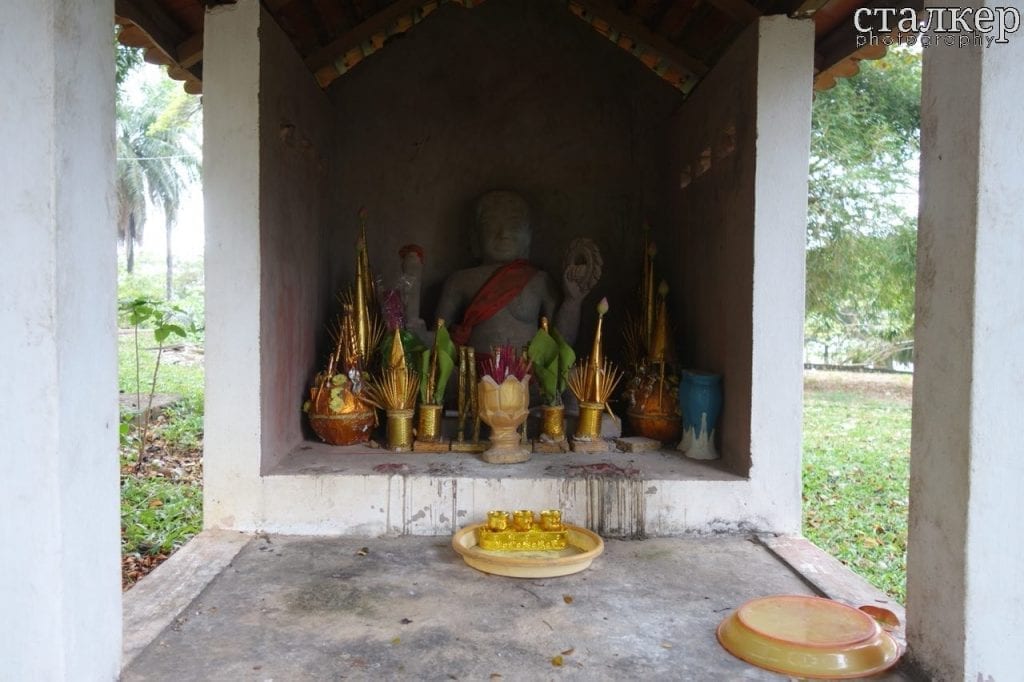 Except beautiful photos the place gave us a shelter. Firstly we wanted to sleep near the sea but when the policemen woke up us and said to go away, we decided to return to villa and hide there. No one disturbed us during our sleeping and we had a nice but hot night nearby villa. 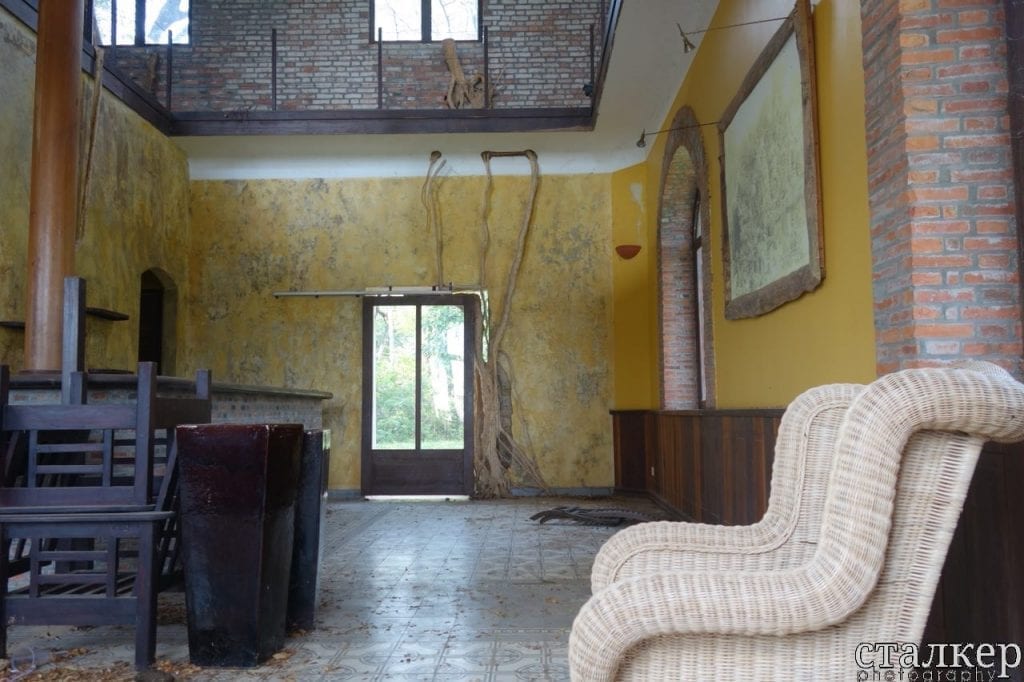