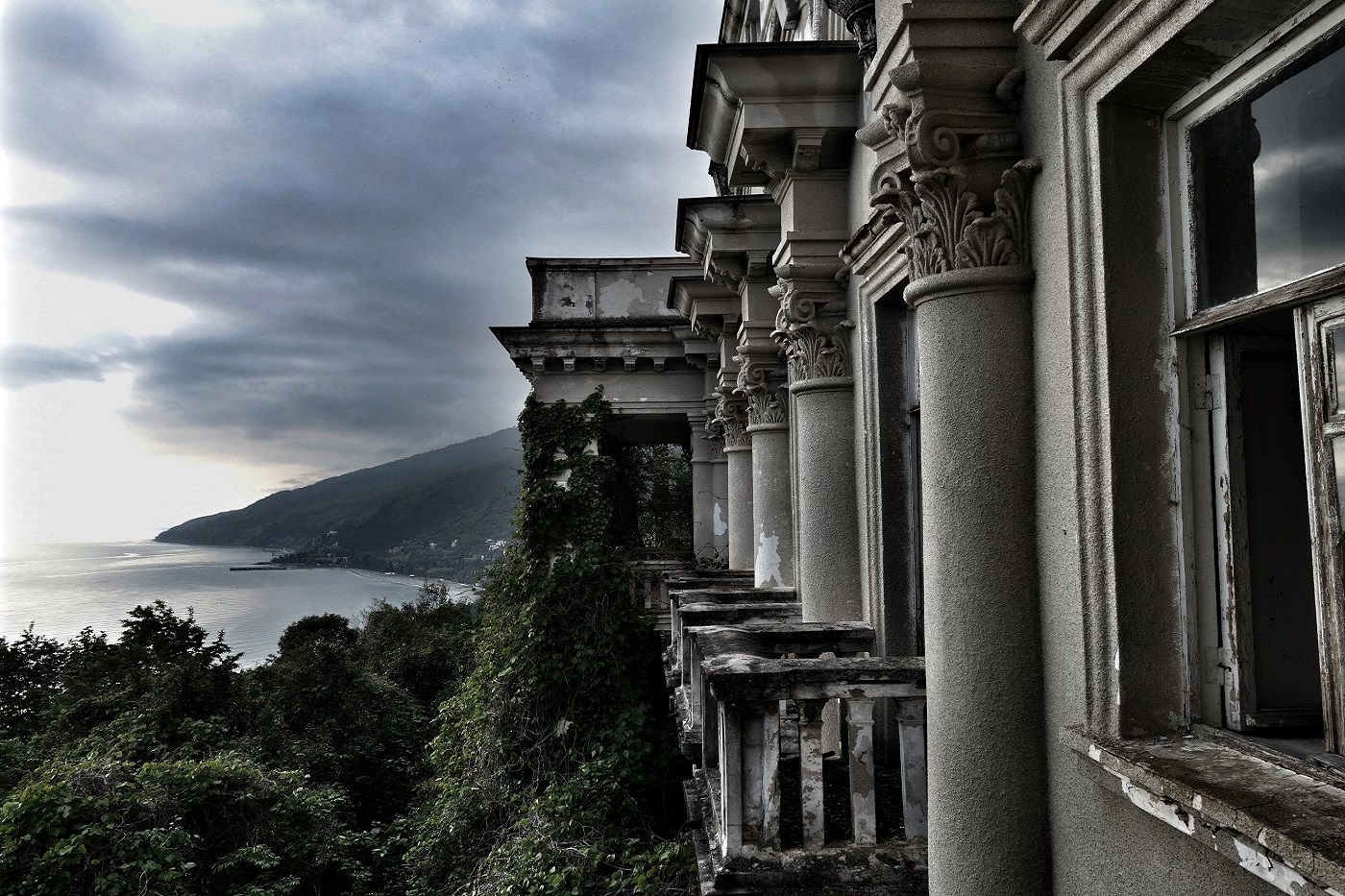 A paradise immersed in the nature. A SPA of the past, organized to bring maximum of well-being to the body and mind of the patient being treated.

The sanatorium is located in Gagra, not far from the cave of Svyatogo Ipatiya. Before reaching the cave (which I do not recommend to visit), some stone stairs lead up to the sanatorium in the corner where there is a small shop. According to locals there should be snakes that inhabit the area, but during all the time I was exploring (a total of 4 hours) I didn’t even see the shadow of it. 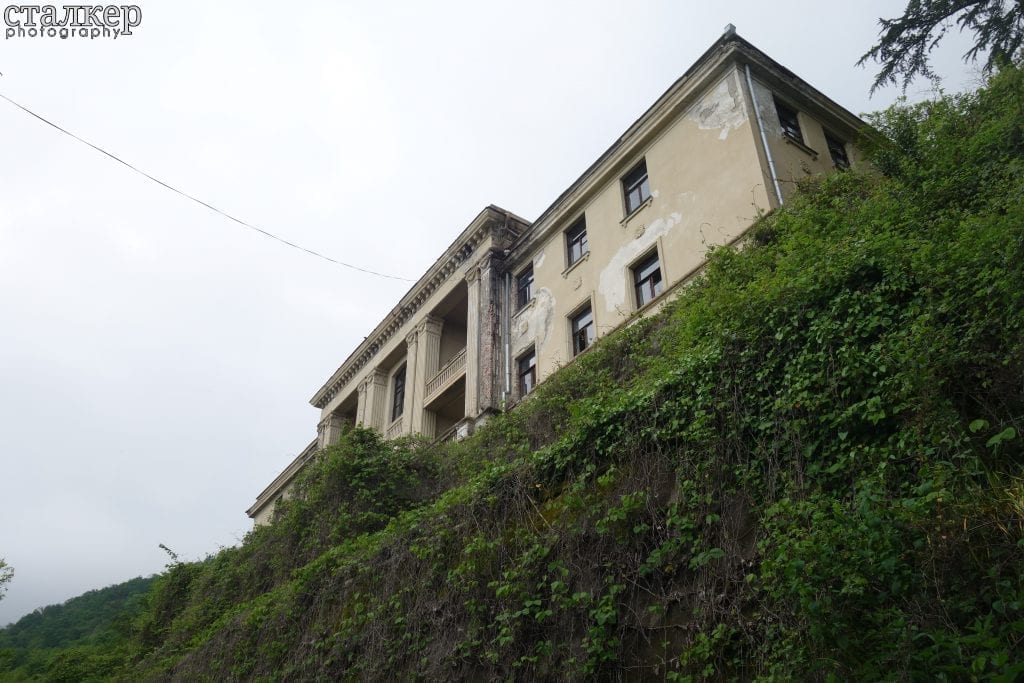 History of the Soviet Sanatorium

The sanatorium was built in 1953. During the Soviet Union period the various buildings were used as a resting place for navigators and sailors. 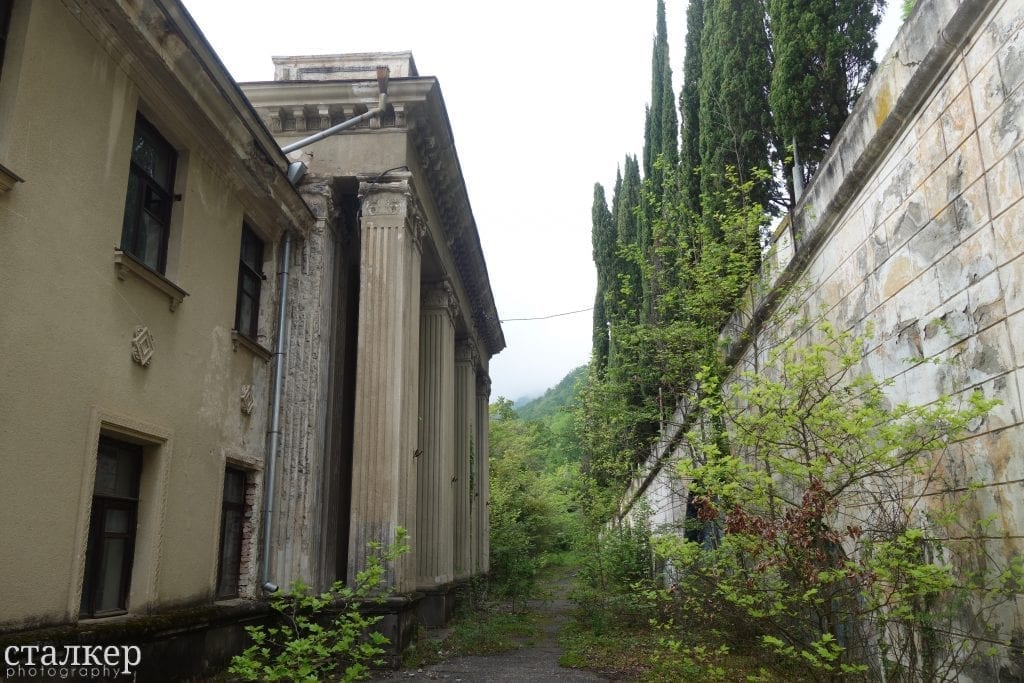 Visible from the city of Gagra, the sanatorium shows itself in all its grandeur. Several structures are located within an area that covers an entire slope of the mountain.

Before arriving in front of the sanatorium I ask for information from an old woman who lives nearby. Being deaf, I am going to repeat and ask for information several times. She asks me where I come from, and I reply that I am Italian. All happy, she offers me something to drink before continuing my journey and then she wishes me good luck.

Arrived in front of the first of the many buildings left abandoned, I immediately rushed in, but not before I had a stick (just in case of snakes).

The ground floor is totally deserted if there were not some rubble and old newspapers. The building is spread over three floors, but to reach the last one I am forced to pass through the axes of a window, located at the back of the building. The steps and the wooden boards do not give me much confidence, but I try anyway.

One crunch after another and here I reach the next floor. The plaster of the walls changes from a faded white to a bright blue. Passing from one side to the other of the corridor I peer into the various rooms, from which I enjoy a beautiful view. In some places, the plants and trees have made their solemn entrance from the windows, and very slowly, as if they were about to stretch, they reach the corridor.

I move upwards to cross myself with another series of buildings. Suddenly I stumble into a root, and with a confused look, I look around, as if I had lost myself in an infinite labyrinth. I pass in front of one to use lateral stairs and enter another one. Here there is a very long corridor with a myriad of rooms on its sides. In the centre, there is a large hall that makes the light enter widely. 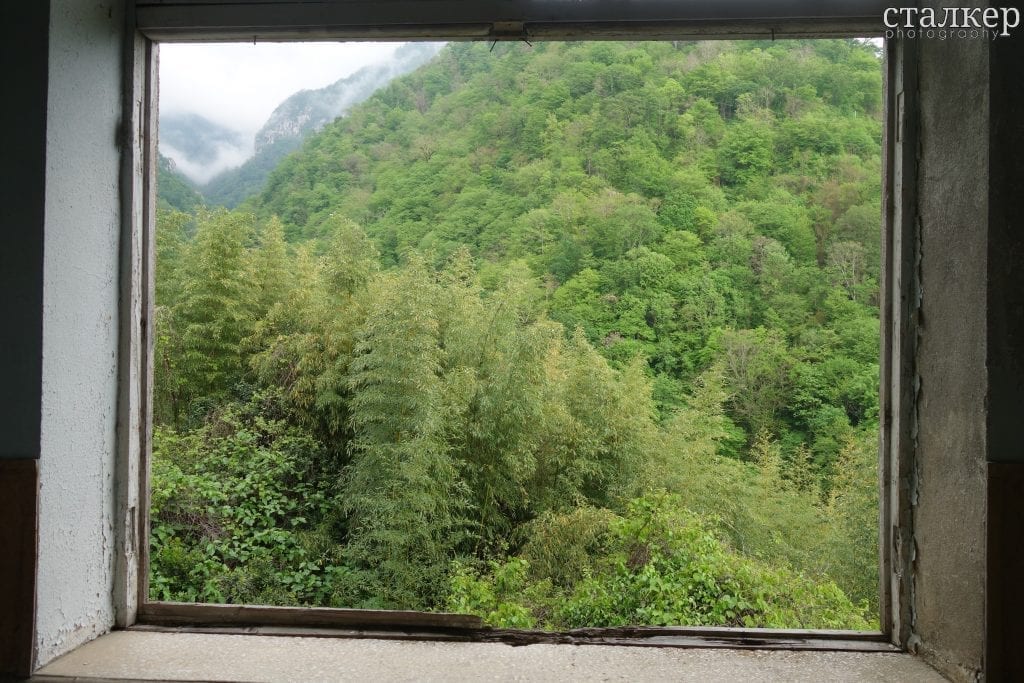 Here, too, I go up the stairs, and in this building, I come across the first piano. Hidden in the shadows, it lies almost like a relic of the past. The strings and keys in many places are missing or completely destroyed, although they can still produce some sound. 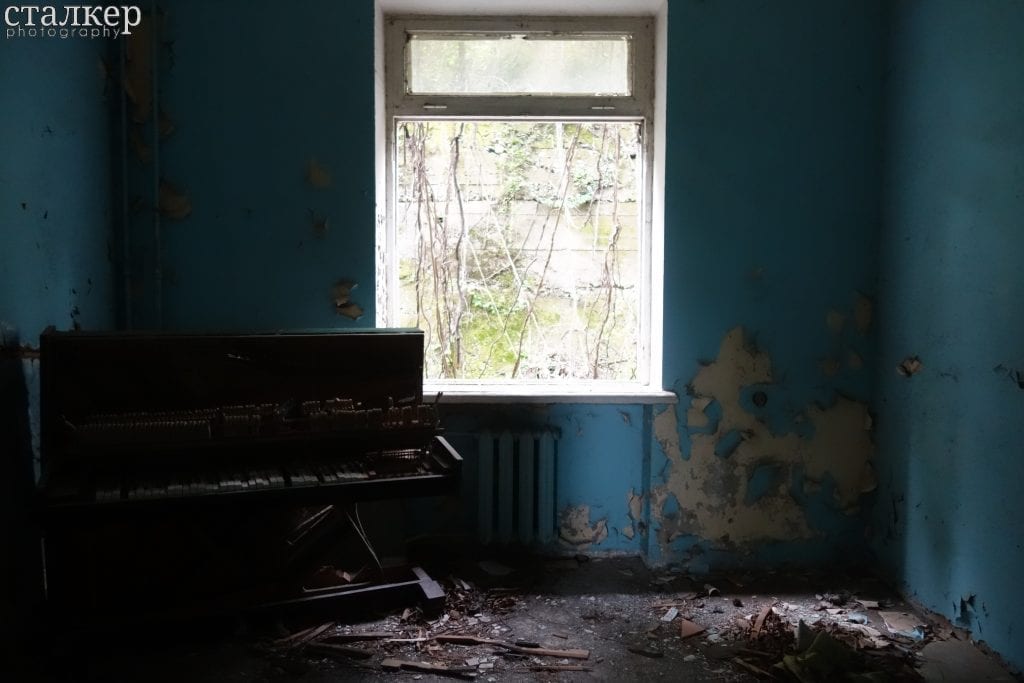 On the upper floor, I come across a room totally immersed in papers, newspapers of various kinds and even books. Some are written in Georgian, others in Abkhaz, and others in Russian. Walking between one sheet and another, I even find some poems.

Backing up, I head for the building that I skipped a short time before, passing a wooden bulletin board where the news from various newspapers was once placed. Among these, you can not miss “Pravda”.

This last building turns out to be a cinema and a theatre, with a piano on the raised wooden platform and what remains of a projector in the room on the first floor. 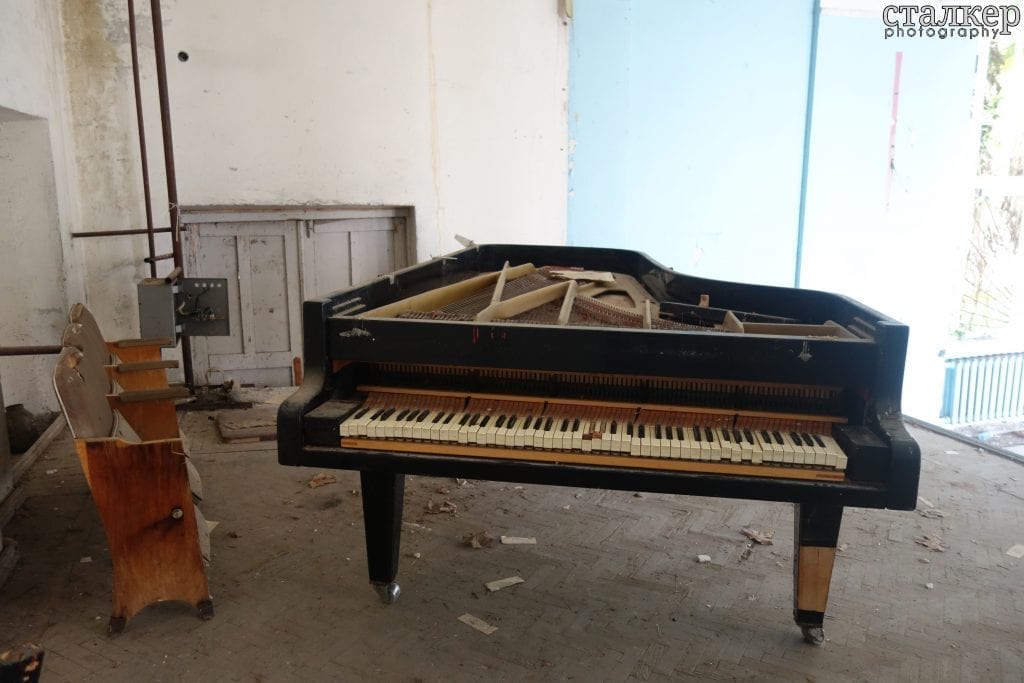 All of a sudden I hear noises coming from outside, and dogs suddenly break into the cinema. I am not surprised because I already understand from their attitude that they are simply anxious to understand who is this unusual visitor. The owner calls from outside the structure and without any hesitation, they run away. 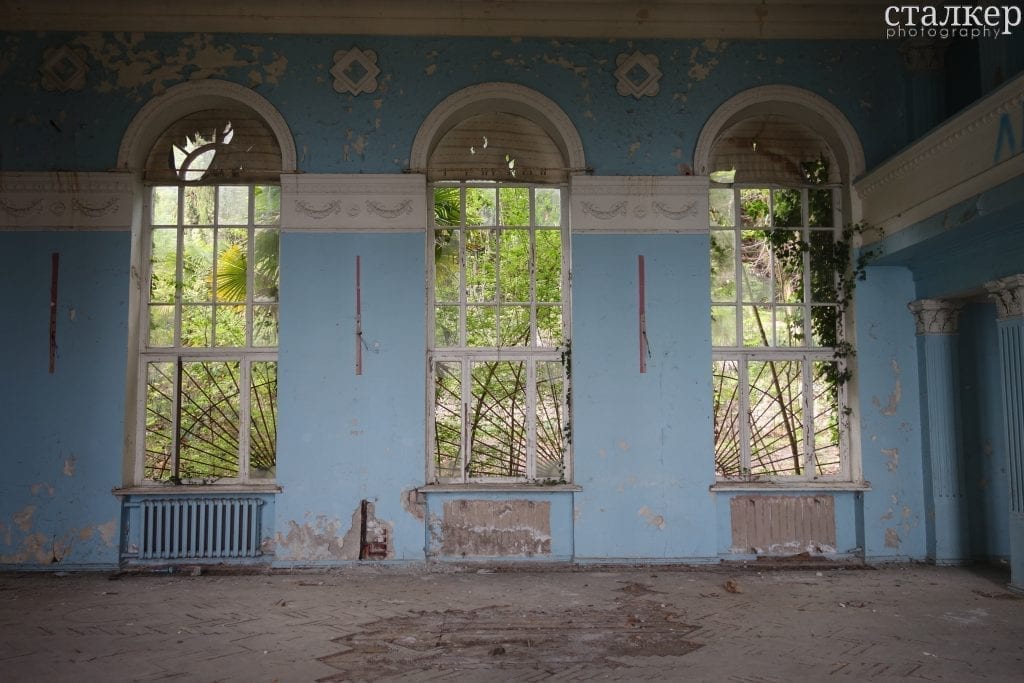 Taking advantage of the situation, I ask the elderly man a few questions, which he is available to answer. He also decides to be my guide for a piece of the road, showing me a plate attached to the top of the sanatorium with the date “1953” written on it.

The gentleman in the front row led by his dogs guides me to the top floor of another building, from where it is possible to enjoy an extraordinary view: the sea, the mountains, the sky, all a unique pieces of different colours that are intertwined.

The man and his two little dogs leave me so that I can continue my adventure in the remaining building. Stone staircases lead me to a fountain and to small tables, and to wooden benches.

“It must have been the recreational area,” I think to myself.

I climb through wooden barricades to go through a window and finally enter in what will be the last building I’m going to visit.

Quickly I hasten to go around the different floors, devoting some of my time only to the kitchen department where some appliances are left to rust.

In 10 minutes I find myself already outside on my way back to Gagra. Along the paved road the cypresses coolly thank me for the totally unexpected visit.