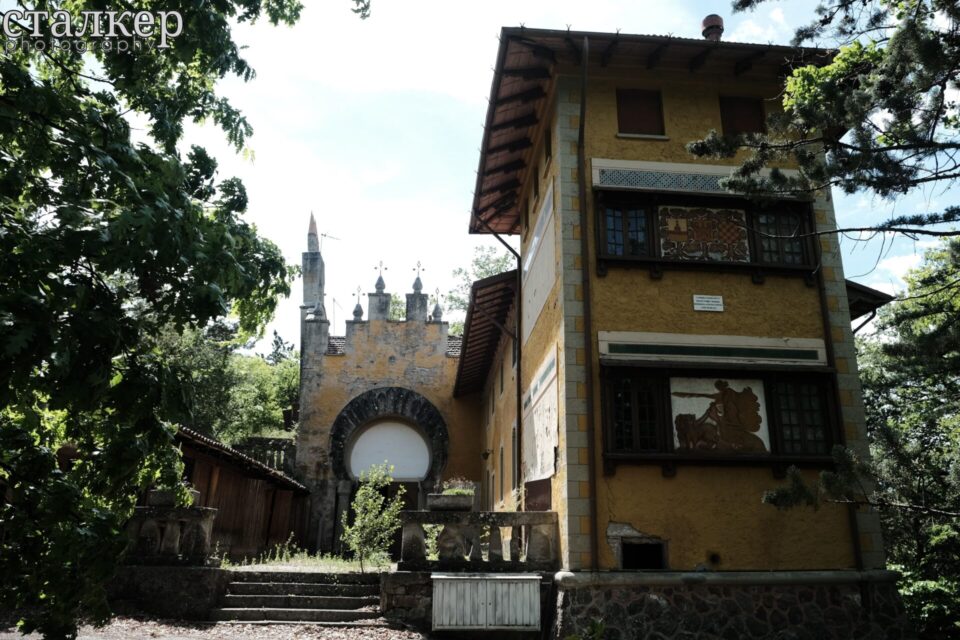 A fusion of Art Nouveau, Neo-Gothic, Eclectic and Neo-Renaissance styles, a villa more reminiscent of a Masonic place of worship than a residential building.

We are in the Bolognese Apennines, an hour and a half’s drive from Bologna. Surrounded by green mountains, we come across a rather bizarre figure, almost as if it were a giant fork grafted into the ground. You can easily enter the villa through a small opening in the entrance gate.

Also known as Villa del Cavaliere, Villino R. seems to have been abandoned in the early 2000s. Its nickname is due to a fake certificate of honour of Cavaliere della Repubblica to the owner, who has now disappeared into thin air. 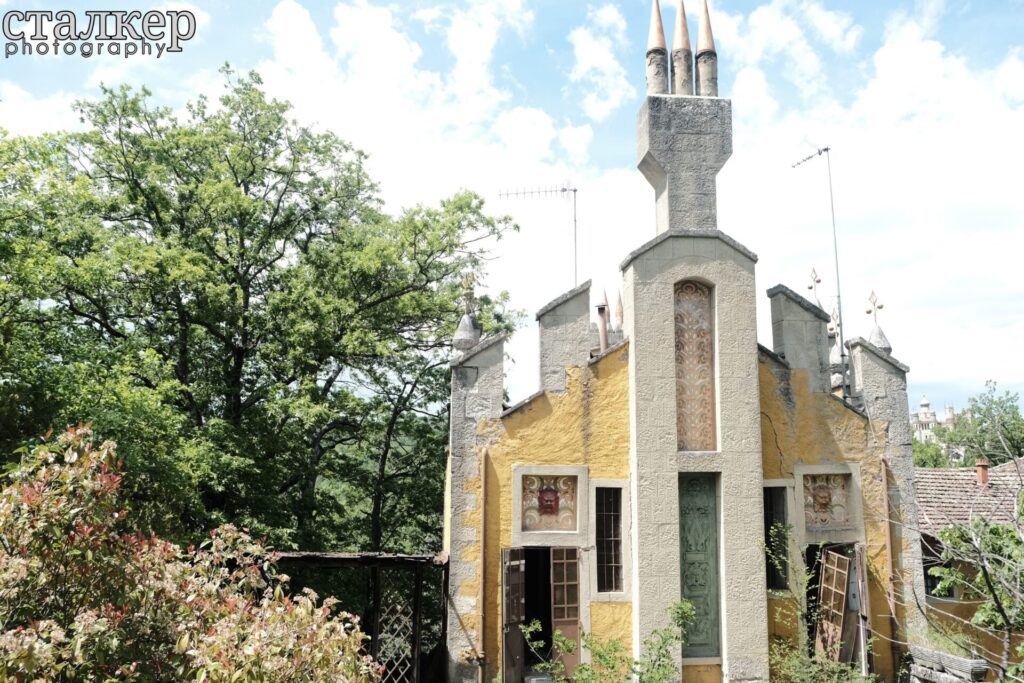 The father of the current owners restored the building in 1969, adding rooms and accessories. When the father and mother died, the children inherited the house and abandoned it to their fate. Now the heirs seem to manage and own a leading company in the sale and installation of small and large household appliances. 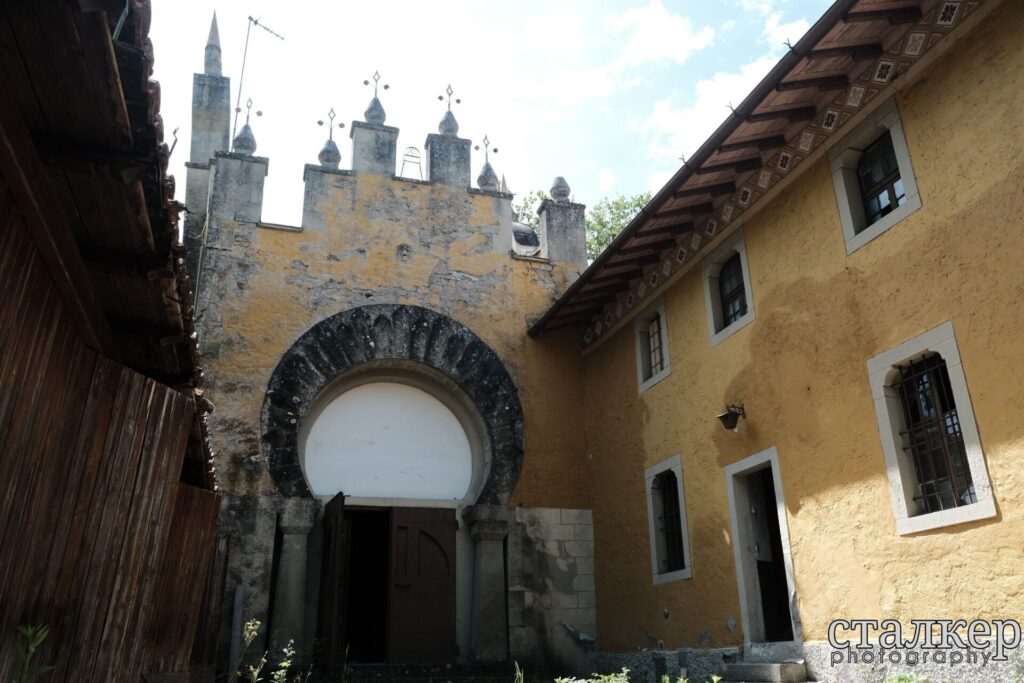 The architecture, between Art Nouveau and eclectic, is a clear reference to that of Rocchetta Mattei. In times past there were underground passages connecting the castle to the villa. 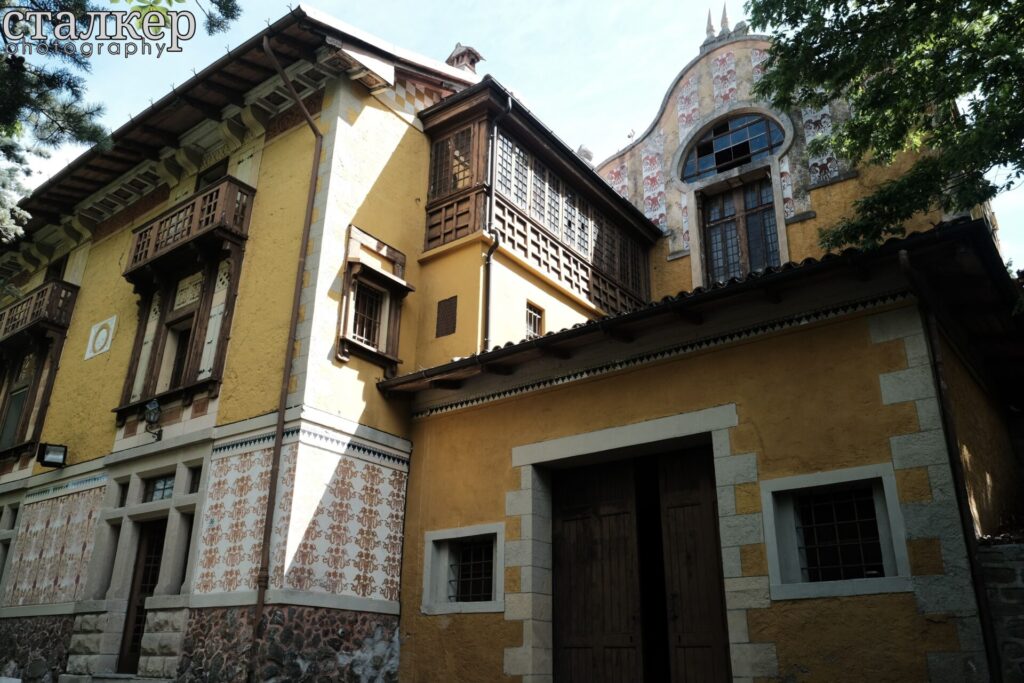 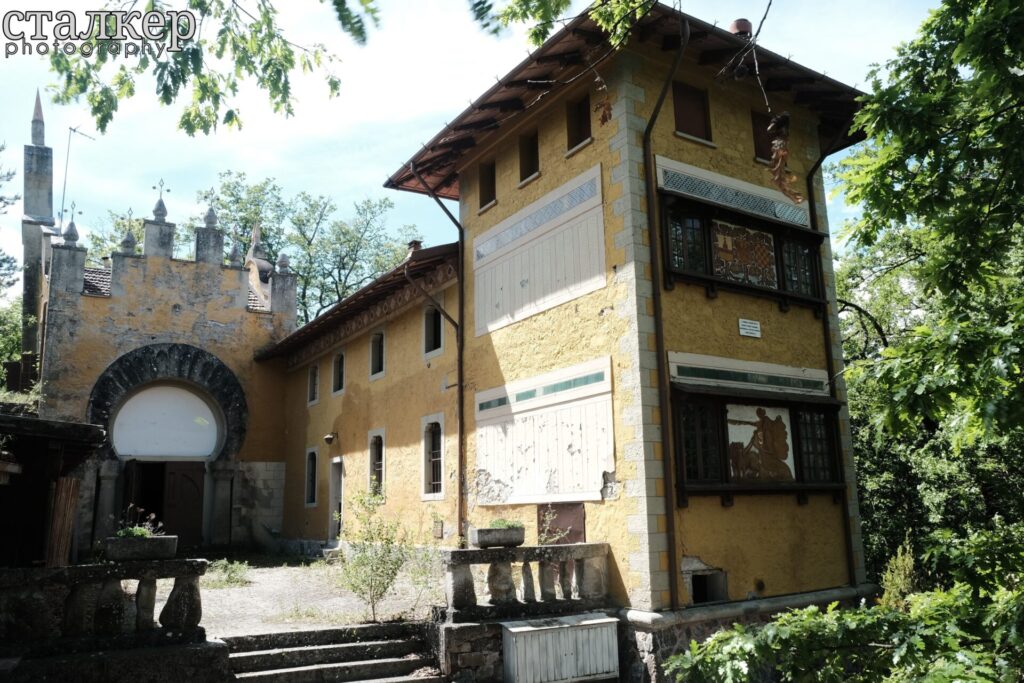 The spires of the fireplaces are close to northern European architecture, with coffered ceilings typical of a neo-Renaissance style. Wooden finishes and leather armchairs in the ground floor flats, more modest others at the back, near the “fork”. Part of the property are a fishing pond, a swimming pool, cages for various farmyard animals and a tool shed.

Villino R. is one of 30 buildings built by Count Cesare Mattei himself to house his patients. An important historical figure, he had contacts with the Queen of England, the family of the Tsar of Russia, Gioacchino Rossini, Pope Pius IX and was also mentioned in Dostoevsky’s The Brothers Karamàzov. 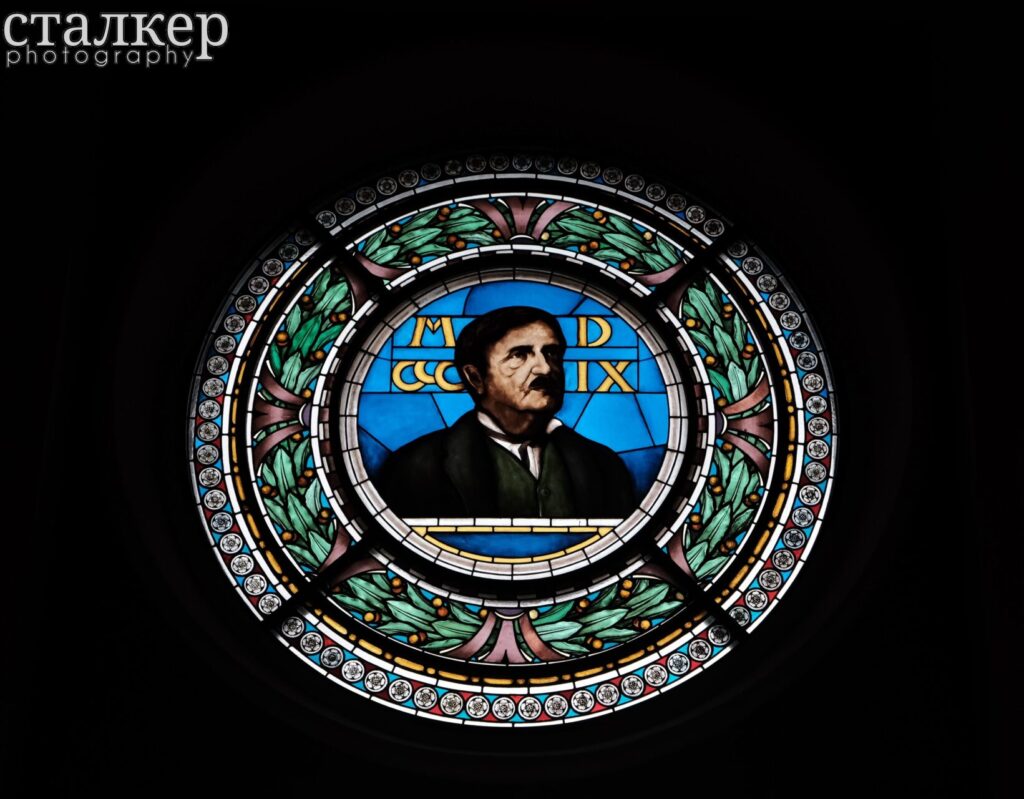 The Count treated his patients with a science of his own invention, Electromeopathy. The most widely practised alternative medicine in the world between 1870 and 1930, Mattei began to study its principles in the wake of controversies with doctors treating his mother who was suffering from breast cancer. This medical therapy, in a sort of fusion of homeopathy, phytotherapy, alchemy and magnetism, consisted of combining medicated granules with liquids known as ‘electrical fluids’, thus restoring the balance between the body’s two electrical charges.

By the 1880s, the practice had spread worldwide, with more than 100 Electromyopathy centres in Europe, the United States and China.
For those who want to know more, I leave two links in the description: 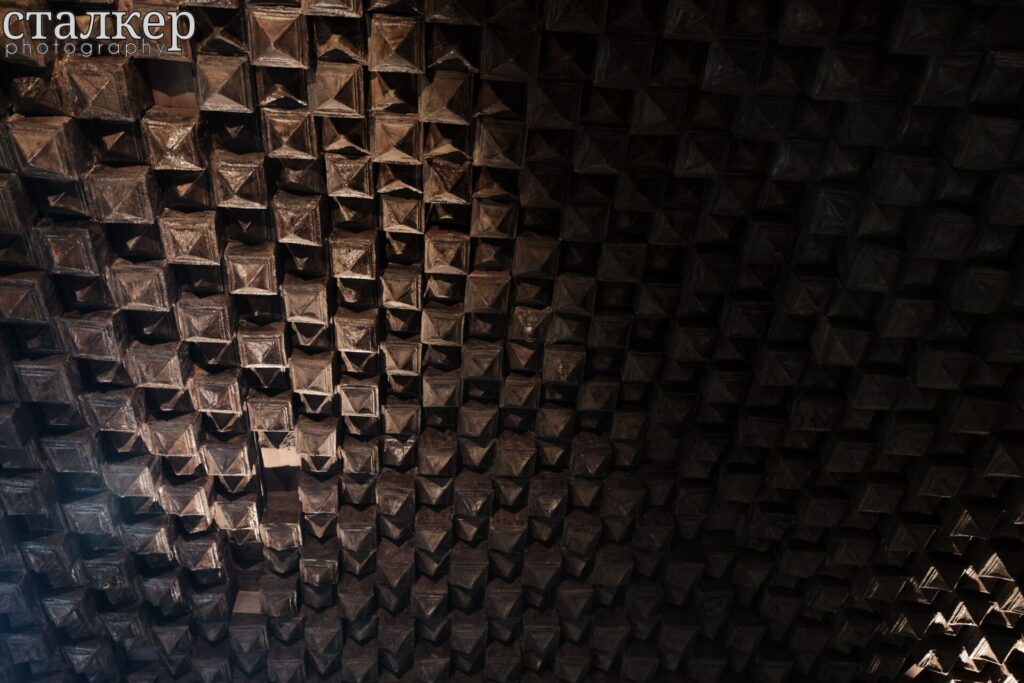 Related to Villa Ventura there is a building of extravagant and unusual architecture, erected in the second half of the 19th century at the behest of Count Cesare Mattei. 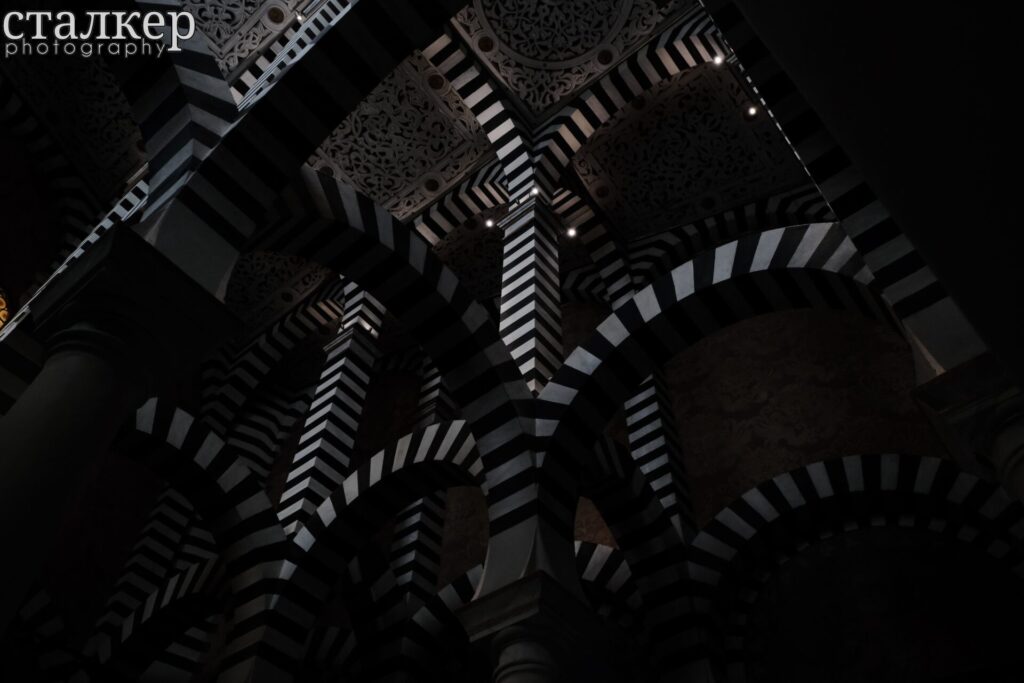 The structure of the fairytale castle was modified several times by the count during his lifetime, making it a labyrinth of towers, monumental staircases, reception rooms and private rooms that interweave different styles, from Art Nouveau to Gothic, Neo-Medieval and Moorish.

The most obvious decorative references include the Alhambra in Granada for the Lion’s Courtyard and the Great Mosque of Cordoba for the chapel where the Count is buried.
In terms of history and architecture, this place reminds us very much of the magical Castle of Sammezzano.