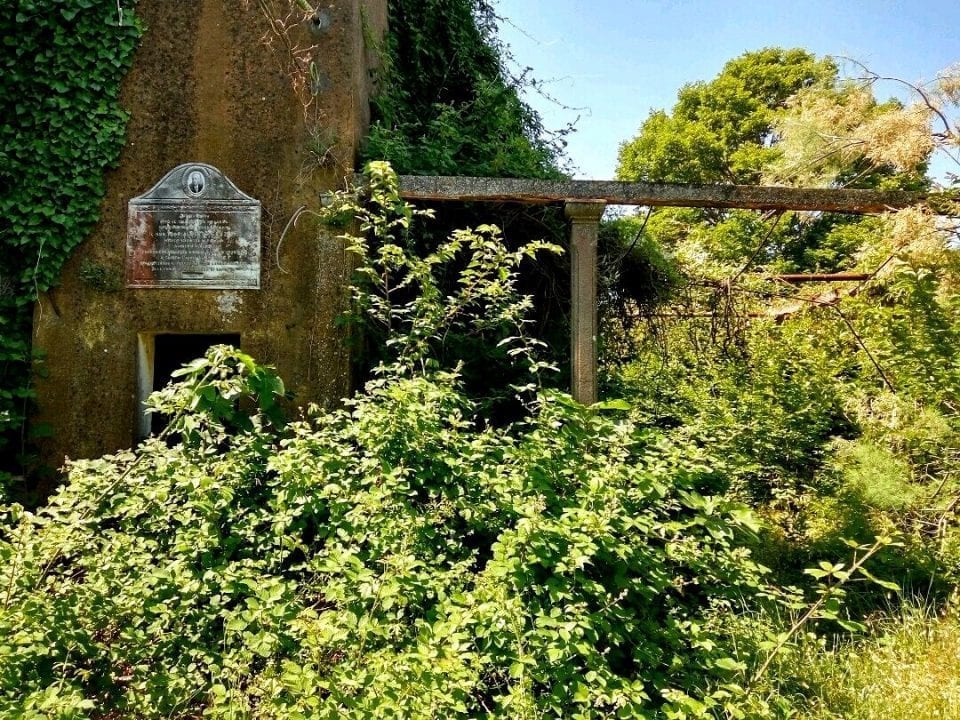 This land until 1923 was deserted and malarial, with a twenty-year-old opera. prof. Alberto Graziani, hygienist in Padua, who reclaimed and redense it, transmitting the fruit of his fruitful work to the daughters of Maddalena of Canossa in 1941.

Colonia Ca ‘Roman is easily reachable by ferry by ferry, Line 11 of the ATV. The cost of a single ticket is 5 euros and the journey time is 20 minutes. The island can be reached either from Chioggia or from the Lido of Venice. 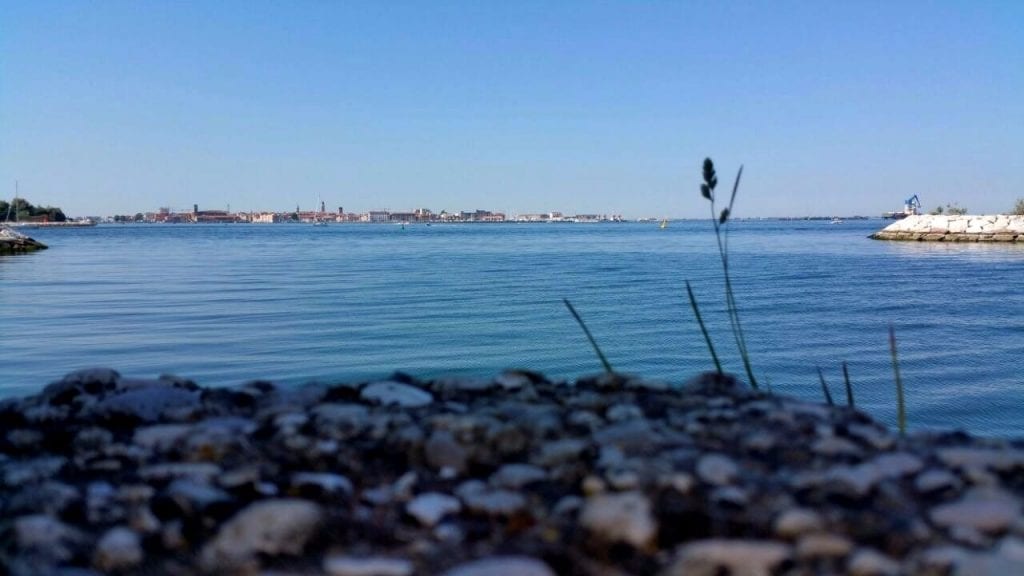 The Colony Marina “Mater Dei” of the Canossian Sisters was built in the 1930s on behalf of Professor and Doctor Alberto Graziani in the Ca’Roman Oasis. For many scientific and social merit, the doctor had many official awards and honors, with diplomas and gold medals. The professor saw this strip of land as the perfect place to “isolate” and “internate” his own sick. A safe area for many children. However, the area where he decided to build wooden shacks was completely inhospitable, wild and with little chance of having drinking water. The project, despite these problems, above all continues thanks to the contribution of Pietro Rosso, a man defined by Graziani as a tool of divine providence. Therefore it happened that Colonia shortly afterwards began to welcome up to 300 children every year on its private beach, about 30 girls from 12 to 15 years and about 120 mothers with children.

In 1966 there was a flood, after which the Colony was destroyed and subsequently reconstructed by some benefactors.

A few years ago, the sisters decided to sell the whole lot to a real estate company that would have to turn everything into a luxury residence. Nevertheless, the former colony is now in disastrous conditions.

All around the island it is possible to admire the defensive system of the Venice lagoon comprising a complex system of fortification works carried out in successive stages to protect Venice and the Venetian lagoon from the Serenissima Republic, from the French Empire, from the Austrian Empire and from the Kingdom of Italy, by now abandoned.

After the end of the war in 1918 the escaped danger of the loss of Venice pushed the military authorities to reduce the importance of the Arsenal in favor of the safest bases of La Spezia and Taranto. Because of this, the military function of the truncated field of Mestre, which structures were progressively transformed into barracks, pulverizes and warehouses, until the definitive abandonment in the 1980s, was reduced.

We arrive late in the afternoon at the colony, when the sun is about to go down. We decide to leave our tent near an abandoned bunker and hide our backpacks for more freedom of movement. 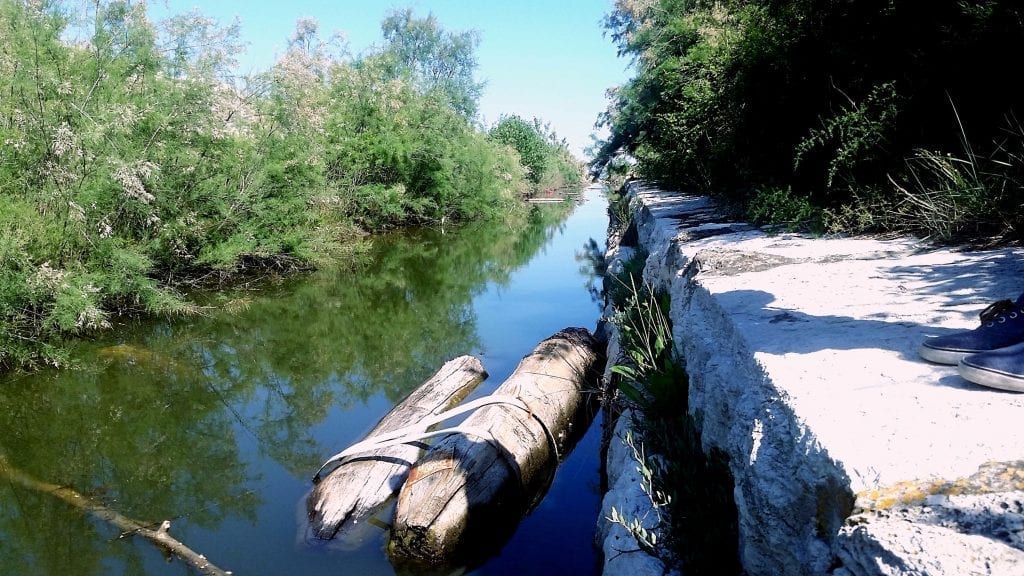 For two hours we explore the surroundings of the island and we immediately realize that it is bigger than what we thought. After walking on the beach, we decide to go back to our tent before the mosquitoes would eat us alive.

In the morning we wake up early, and immediately begins the “stalkeraggio” of the area. First, we look at all the concrete blocks left as “guard” of the island. Sparse everywhere the fortifications have all the same shape and are constructed in the same way: a corridor with two lateral rooms and a larger central. Undergrounds pass under the middle one delimiting it. Nothing is left inside except for garbage and graffiti. Moving is not easy at all because the terrain and the paths are covered by weeds and brambles which make our poor legs suffer.

As we approach the side of the shore we observe in the distance an abandoned boat. An idea pass through my mind to swim till the wreck but then, watching the brown water and the nauseating odor that covers the whole area, I give up.

We return on the main road to catch the ferry but without forgetting the most important part, the Colony itself! So, at halfway we go left and down a stairway till an open gate. Here is the entry that immediately we are ready to cross and, in front of us, appear series of buildings. The first row of houses shows something like baths and closets that still contain some clothes, umbrellas and chairs. Moving towards to the sea we embark on other buildings probably assigned before as dormitory for patients. On the right, isolated a bit from everything, we can see the church, still standing despite vandal acts suffered over time.

Approaching even more the sea we notice a glimpse and a small rusty door from which we exit directly to the side of the Lido. In front of us another beach where some young people are resting and happily taking the sun.

We return to our “reality” and here we are immediately inside another building. We begin to travel the whole perimeter of the “Mater Dei” institute slowly throughout its greatness. The second and third floors are still safe excluding some other areas where the stairs have completely collapsed. Though most of structure is empty, the combination of colors, lights and wooden parts makes this exploration interesting and the abandoned place fascinating.

Almost suddenly an armored concrete tower appears from the middle of the vegetation and shows itself in all its grandeur. Looking for the entrance we get back into the trenches that once again leave some gifts to our legs. An opening at the back and we fall in the dark inside the tower. There are many stairs, and the passage is tight. There are two other floors, not considering the ground floor, each with a slit in the concrete big enough to spy on any enemies and shoot with the rifles. A further staircase with a very tight passage forces us to leave the backpacks on the second floor. Trailing between the sides of this tiny passages we arrive up, on the “roof” of the tower. Uhhhhh the view is great from here! The tower could be thirty meters high, if not more. 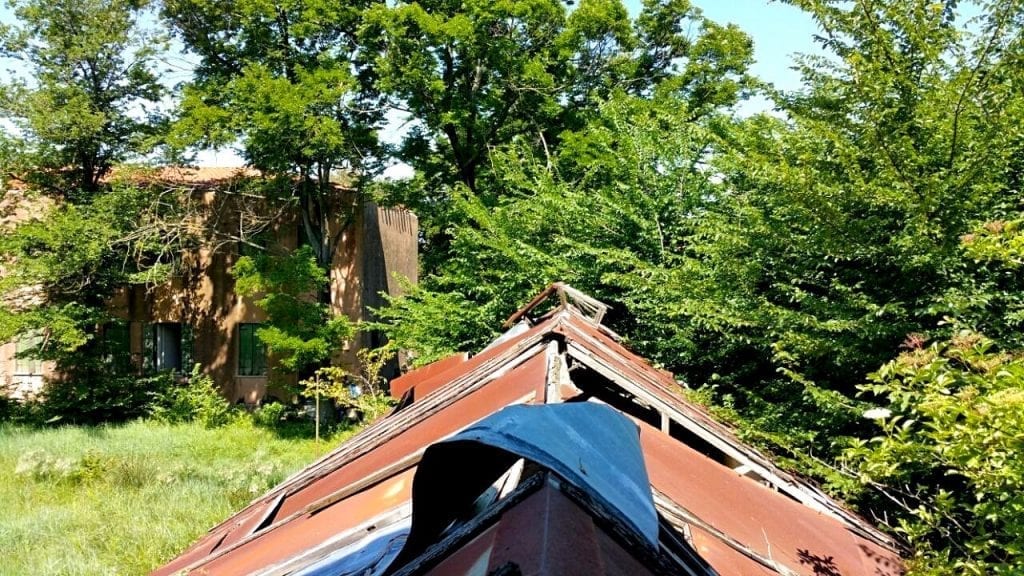 We descend ex-novo through the tiny passage and stairs until we get to the ground where we then take the trail to get out of Colony. Ten minutes on foot and finally we catch the boat.

It was a very exciting exploration that I would certainly repeat not only for the abandoned place but especially for the atmosphere and tranquility of the island.