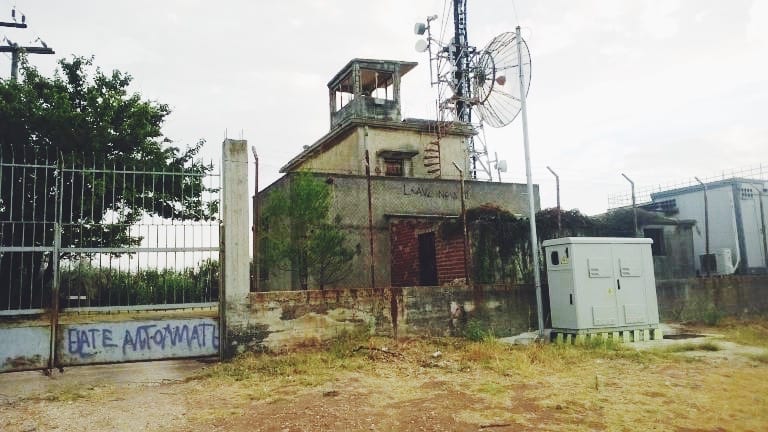 On the edge of the cliff, left alone by the time, an old transmitter was resting ready for the next “speaking”.

How to reach and location

Ohhhhhhhh and today (maybe 2 years ago ahaha) Stalker is in Greece! The place is situated in Alexandroupoli (Αλεξανδρούπολη), capital of the Evros regional unit in East Macedonia and Thrace. It is easy to reach it: the road comes through the beach of Κόκκινα Βράχια. On the end of it, up on the cliff and not far away from the university you can find the old transmitter.

It was used, starting from 1990, as transmitter for the biggest telecommunication company in Greece (ΟΤΕ’s).

A gate, just an opened gate, is blocking the passage. No guards, no indiscreet looks, isolated from the rest of the tourists, it’s like an invisible bubble. An invisible bubble with a special “protection” helps this place to stay abandoned and not noticed.

Passing the gate I bumped into an open iron door. “Easy way”, I thought to myself, and I just went for it. My friend George decided to wait me out of the building, guarding the bikes.

There were three floors: ground, first one, and the “roof” (I counted it as a floor because of stairs). On the ground floor there were three rooms, all three – plenty of papers, archives and boxes. On the right – machines, broken and not broken, used for telecommunications. On the left – a dark room with a paper floor instead of a concrete one. Also there was a hidden small bathroom…

Up the stairs, running for the few time left, there was the first floor. Half detached from the wall, the metal door welcomed me to what probably was the central room, from where they were sending signals in all around the zone. Again shelves, again documents, ruined by the atmospheric agents. Another opened door led me to an open space, a kind of terrace from where spiral, metal and old stairs were coming up.

Said “hi” to George while I was climbing the stairs, feeling myself swing from one side to another, one as if I would be in a seesaw. From up, the view was amazing and breathtaking: sea, sunset, samothraki island in the distance, read rocks… only the arrive of my friend could woke up me from this state of enchantment. The antenna was standing right next to us, imperturbable after all this time…